What is a transistor?: History of Transistors

Transistors have the function of amplifying and switching electrical signals.
In the case of radio, the extremely weak signals transmitted through the air are magnified (amplified) before playing through speakers. This is the amplification action of a transistor.
A transistor also acts as a switch, operating only when a predetermined signal arrives.
An IC or LSI is a collection of transistors that provides the basic function of a transistor.

Transistor as a switch

Describes switching operation when the Emitter is grounded.
Once a voltage (approx. 0.7V or more) is applied to the Base terminal of the transistor a small current will flow, causing the transistor to turn ON and current to flow between the Collector and Emitter.
Conversely, when the applied voltage to the Base is low (less than 0.7V), the Collector and Emitter are OFF and no current flows between them.
Switching a transistor is like turning the current flow from the Collector to the Emitter ON and OFF using the Base as a switch. 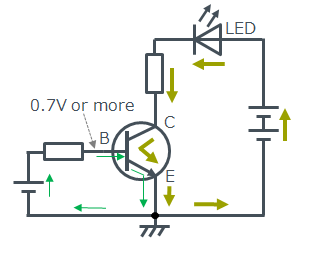 【Image of Switching ON】

Transistor as an Amplifier

Let’s compare the function of a transistor to the mechanism of a water supply. A transistor is comprised of three legs, with the Base the tap, the Emitter the faucet, and Collector the tank. By controlling the tap with a small force (input signal to the Base), a large amount of water flows from the tank (Collector) to the faucet (Emitter)...Using this analogy makes transistor operation easier to understand.
Now, let’s take a closer look at the principle of transistor amplification using Figs. 1 and 2. A current (IC) hFE* times the current (IB) proportional to the Base-Emitter voltage (VBE) created by the input voltage e and bias voltage E1 flows through the Collector. This Collector current IC flows through the resistor RL, and a voltage of IC x RL appears at both ends of the resistor RL. Eventually, the input voltage e is converted (amplified) into a voltage ICRL, which appears at the output.
*hFE: DC current gain of the transistor

A transistor consists of a PN junction, with current flowing between the Collector and Emitter when current is applied to the Base.
Here, we will explain the operating principle using an NPN transistor as an example.
When a forward voltage (VBE) is applied between the Base and Emitter, electrons (- charge) in the Emitter flow into the Base, where some of them combine with holes (+ charge), resulting in an extremely small Base current (IB).
As the Base (P-type semiconductor) is structurally thin, many of the electrons flowing into the Base from the Emitter escape to the Collector.
The Collector-Emitter voltage (VCE) induces electrons (- charge) to move toward the Collector electrode, generating a Collector current IC.
<Current flows in the direction opposite to electron motion> 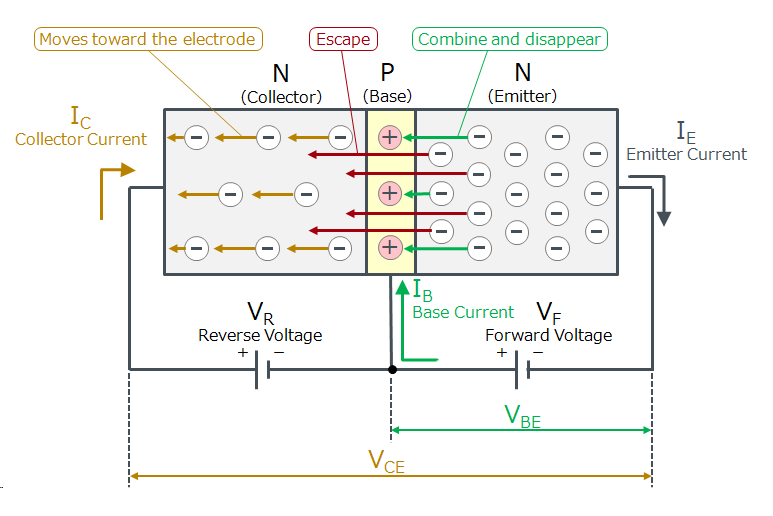 There are two main types of transistors: NPN and PNP. As you can see from the figure on the right, the difference is whether the Collector terminal is drawing or delivering current in the circuit.
An NPN type with Emitter common is used when wanting to switch by input signals. On the other hand, it is standard to use a PNP type when using the power supply side for control.
NPN type carriers are electrons, while PNP carriers are holes (+ charge). In the PNP type, a voltage is applied so that the Emitter is positive and Base negative, causing holes in the Emitter to flow into the Base, some of which combine with electrons in the Base to form a small Base current, and the rest escaping to the Collector to become Collector current. 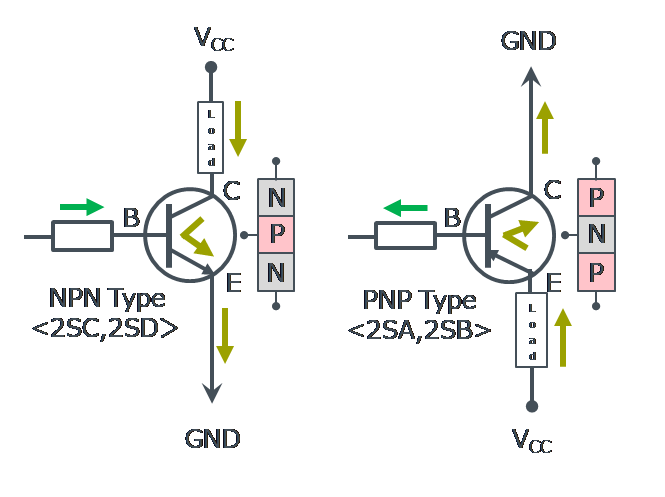 1. Created in 1948 at Bell Telephone Laboratories

The invention of the transistor, which has had a profound impact on the electronics industry, was first developed in 1948.
This moment marked the dawn of the electronic age. Subsequent years saw rapid development of computers and other electronics technologies. Considering that this contribution has enriched all of our lives, it should come as no surprise that the three inventors, physicists W. Shockley, J. Bardeen, and W. Brattain, were awarded the Nobel Prize.
I wonder if there will be any future inventions that could rival the transistor... At any rate, it is clear that the transistor has had a revolutionary impact on the modern world.

2. From germanium to silicon

Transistors were initially made of a substance (semiconductor) called germanium.
However, germanium has the drawback of breaking down at around 80°C, so most of it is now silicon. Incidentally, silicon can withstand heat up to around 180°C.

Outline of a Transistor

The next page shows transistors classified by structure, power dissipation, integration, and shape.