Light Emitting Diode
＜What are LEDs and How Do They Work?＞

LEDs are a type of semiconductor called "Light Emitting Diode". White LEDs, which have achieved practical realization through the use of high-brightness blue LEDs developed in 1993 based on Gallium Nitride, are attracting increased attention as a 4th type of light source.

How do LEDs Emit Light? 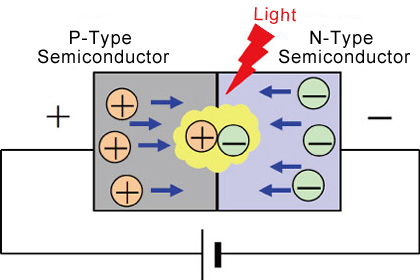 Two types of LEDs are available, a lamp type (leaded) and a chip type (surface mount). Users can select the ideal type based on set requirements.

The LED color (emission wavelength) will change depending on materials used. This makes it possible to customize the color to meet certain wavelength specifications required for applications that use traditional bulbs as light sources (for which standards exist), such as traffic lights and automotive lamps.

Two specifications for wavelength are used to indicate color: λP (Peak Wavelength) and λD (Dominant Wavelength), with λD corresponding to the color actually seen by the human eye.

How is White Light Created?

There are several methods of generating white light using LEDs. Below is 2 typical emission methods.

Combining a blue LED with yellow phosphor, which is a complementary color, will yield white light. This method is easier than other solutions and provides high efficiency, making it the most popular choice on the market.

Combining the 3 primary colors will result in white light. Generally this method isn't used for lighting, but for full-color LED devices.