Smart power switches from ROHM’s IPD (intelligent power device) series are available as low-side or high-side switch ICs to provide you with the right part for your application. The designs of these automotive-grade universal switches integrate a low on-resistance MOSFET and multiple protection circuits into one chip. This provides enhanced protection against cases of overheating, overvoltage, overcurrent, and load short circuiting, ensuring suitability for a variety of industrial applications, including resistance-capacitance-related inducible load installed in engine rooms and compartments.

Until now, circuit protection entails the use of an MCU to judge the error signal detected by the overcurrent detection IC before transmitting it to the IPD as an enable signal to initiate shutdown or repeated shutdown/restart operation. However, this can result in unstable circuit operation or malfunction.
In constrast, ROHM’s new IPDs provide protection functionality without an MCU and are capable of supplying the minimum current during protection operation, allowing the circuit to operate while generating an error signal. This makes it possible to make emergency calls during circuit operation in the event of non-fatal abnormalities.
What’s more, circuit blackouts can be avoided when the mechanical load increases due to aging or unexpected increases in parasitic capacitance.
In addition, independent operation is enabled without going through an MCU, reducing the number of components required and improving reliability. 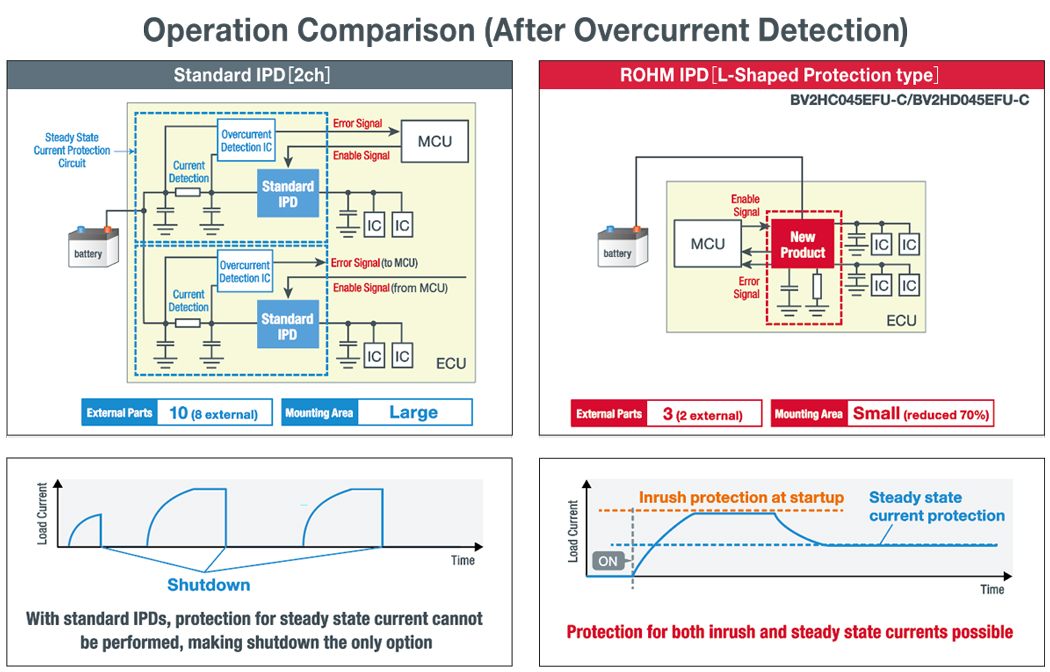 Features 2. Protects even in areas impossible to cover with fuses

Standard fuses are designed with a certain margin against short-circuits and inrush current during power ON to prevent erroneous cutoff.
In contrast, ROHM’s new IPDs are capable of both protecting against inrush current and masking the inrush current region, enabling high accuracy detection of even slight current abnormalities during steady state operation.
Also, since the minimum current can be supplied instead of shutting down operation immediately after an abnormality occurs, they can be used for preventive maintenance by detecting abnormalities during circuit operation. ROHM’s IPD power switch block features a discrete high current structure capable of covering areas that can only be switched using relays.
In addition, the life of semiconductor switches exceeds one million times.
This ensures worry-free use, unlike mechanical relays which are susceptible to contact failure due to aging, gases, or carbides. 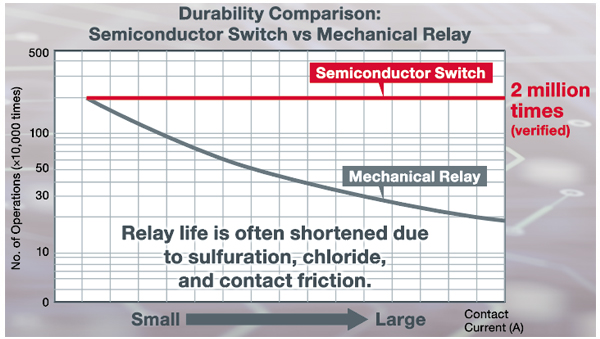