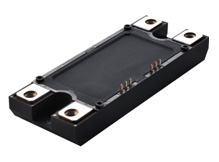 SiC technology is expected to have a significant impact in the power electronics sector (e.g. industrial equipment, solar cells, electric cars, and trains) due to its superior material properties (i.e. smaller power conversion loss) compared with silicon (Si). In fact, it is estimated that if all conventional Si semiconductors were replaced with SiC in Japan alone, the energy savings would be equivalent to 4 nuclear power plants*2. In response to this, ROHM has been working continuously for a number of years on developing SiC products and in 2010 was the first supplier in the world to successfully mass produce SiC SBDs and MOSFETs.

Development of "full SiC" modules for use in power devices, however, has been impossible up to now despite significant efforts by several semiconductor manufacturers due to unstable reliability at high temperatures. ROHM was able to overcome these problems by developing unique screening methods and defect suppression technology that guarantees reliability, as well as a control system that prevents characteristics deterioration at high temperatures (up to 1700°C), making it possible to establish the industry's first mass production system for SiC power modules.

The new modules integrate a state-of-the-art dual-element SiC SBD/ SiC MOSFET pair that reduces loss during power conversion by 85% compared with conventional Si IGBT modules. In addition, high-frequency operation of at least 100kHz – more than 10 times greater than IGBT modules – is possible. And although the modules are rated at 100A, their high-speed switching capability, reduced loss, and improved heat dissipation characteristics make them the ideal replacements for 200-400A Si-IGBT modules. Replacing a conventional 400A-class IGBT can cut volume by 50%, and the lower heat generated requires less cooling countermeasures, contributing significantly to end-product miniaturization.

Mass production (and shipment) is scheduled to begin at the end of March. 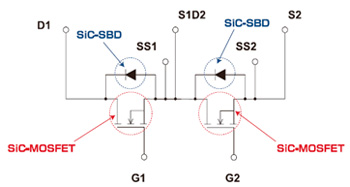