VCSEL has become popular in recent years with the adoption of laser light sources for spatial recognition in tablets and facial recognition in smartphones. And with the emergence of Automated Guided Vehicles (AGVs) and industrial inspection systems utilizing gesture and shape recognition, the demand for VCSEL is expected to increase.

At the same time, for applications that require automation, shorter pulse drive and higher output for the light source are required to achieve higher accuracy sensing.

Conventionally, in VCSEL-equipped laser light sources, both the VCSEL device and MOSFET for driving the light source are individually mounted on the board. Consequently, the wiring length (parasitic inductance) between products has an unintentional effect on the light source output and drive time – making it difficult to achieve a light source that provides the high output and short pulses needed for high accuracy sensing.

The new VCSEL module technology developed by ROHM makes it possible to modularize the VCSEL and MOSFET elements into a single package. By minimizing the wiring length between elements, the performance of each element is maximized, resulting in a light source capable of short pulse drive (under 10ns) that reduces susceptibility to external noise from sunlight while enabling up to 30% higher output over conventional solutions.

As a result, when evaluating ROHM’s VCSEL module technology in spatial recognition and ranging systems comprised of a control IC, TOF sensor (light receiving element), and laser light source (VCSEL module), the amount of light reflected to the TOF sensor is increased by 30% over conventional configurations, contributing to improved accuracy in TOF systems.

ROHM plans on releasing its new VCSEL module in March 2021 for AGVs in the industrial market and facial recognition systems for mobile devices requiring high accuracy sensing. The company will also continue to develop high output lasers for LiDAR in vehicles and other applications.

ROHM develops and supplies LEDs, Fabry-Perot laser diodes, and VCSELs that are being adopted in laser printers, robot vacuum cleaners, and more.

At the same time, we have engaged in research and development of VCSEL module technology to achieve higher output and maximize the performance of VCSEL elements by leveraging expertise garnered from commercializing optical device-equipped products. 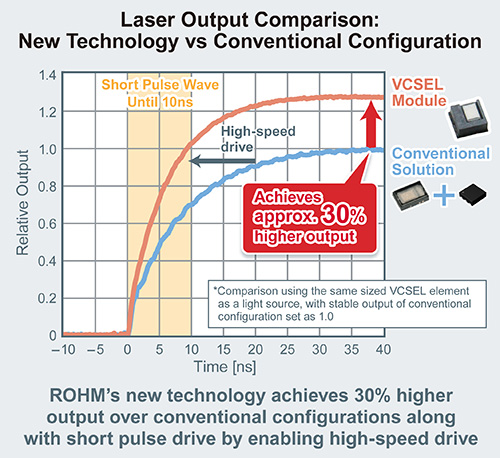 This new technology makes it possible to modularize the VCSEL and MOSFET elements into a single optimized package. To maximize element performance, the parasitic inductance between elements (which is proportional to the circuit wiring length) is minimized, enabling high-speed drive and higher output. This allows users to achieve both short pulse drive (under 10ns) that reduces the effects of external noise from sunlight along with approx. 30% higher output over conventional non-modular solutions.

What’s more, this technology not only reduces circuit design load and footprint with the monolithic form factor, but also contributes to greater power savings by improving drive efficiency through high-speed drive and higher output (enabling faster operation at lower voltages).

VCSEL
Short for Vertical Cavity Surface Emitting Laser. Although conventionally used for communication, it is increasingly being adopted in recent years as a light source for the optical block in sensing systems.

TOF System
An abbreviation for Time of Flight, a spatial measurement system which, as its name implies, measures the flight time of a light source. Often used in spatial recognition and ranging systems.

Parasitic Inductance
An unintended coil component (inductance) that does not appear in the circuit diagram and depends on the circuit wiring length. This phenomenon makes it difficult to pass some electrical signals.

LiDAR
Short for Light Detection and Ranging, an application that uses the TOF (Time of Flight) system (comprised of a light source and TOF or image sensor) to sense ambient conditions.