A DC/DC converter that stabilizes the voltage is often referred to as a voltage regulator.

Two types of regulators exist, classified by a conversion method: linear or switching.

As its name suggests, a linear regulator is one where a linear component (such as a resistive load) is used to regulate the output.

It is also sometimes called a series regulator because the control elements are arranged in series between the input and output.

A switching regulator is a voltage regulator that uses a switching element to transform the incoming power supply into a pulsed voltage, which is then smoothed using capacitors, inductors, and other elements.

Power is supplied from the input to the output by turning ON a switch (MOSFET) until the desired voltage is reached.

Once the output voltage reaches the predetermined value the switch element is turned OFF and no input power is consumed.

Repeating this operation at high speeds makes it possible to supply voltage efficiently and with less heat generation. 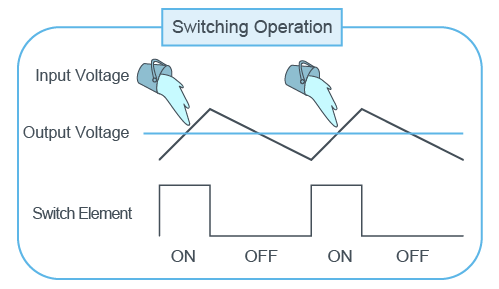