A Trend Towards Miniaturized Electronics

​​​​The history of electronics is closely connected to the development of miniaturization. For example, the first computers were still cupboard-sized devices. Today's laptops surpass those computers in computing power, memory and all other performance features by several orders of magnitude. Nevertheless, their size is limited by their practical handling, the display and battery, but no longer by the built-in electronics.

Miniaturization also enabled the use of electronics in more and more fields of application, such as the automobile. For a long time, vehicle development was all about pure mechanics. Electronics entered the car in the 1930s in the form of radios, and later electric ignition was introduced. Today, up to hundred and sometimes even more microprocessors are built into modern vehicles, and on the way to the autonomous driving car, electronics and miniaturization will play an increasingly important role.

ROHM is driving this miniaturization forward – with both analogue and digital technologies:

Certain applications, particularly in the car, consist of only limited space. For example, satellite cameras are distributed throughout the vehicle and observe the car's surroundings. From this, a 360° surround view is generated for various ADAS applications. There is not much space available for this solution. The entire electronics – for example an imager chip, a communication chip for image data exchange to the ECU/processor unit, and a power management IC (PMIC) – typically must be accommodated on an area limited to not more than 20x20mm. “This is as small as a 2-euro coin,” explains Michael Maurer, Senior Application Marketing Manager for ADAS. 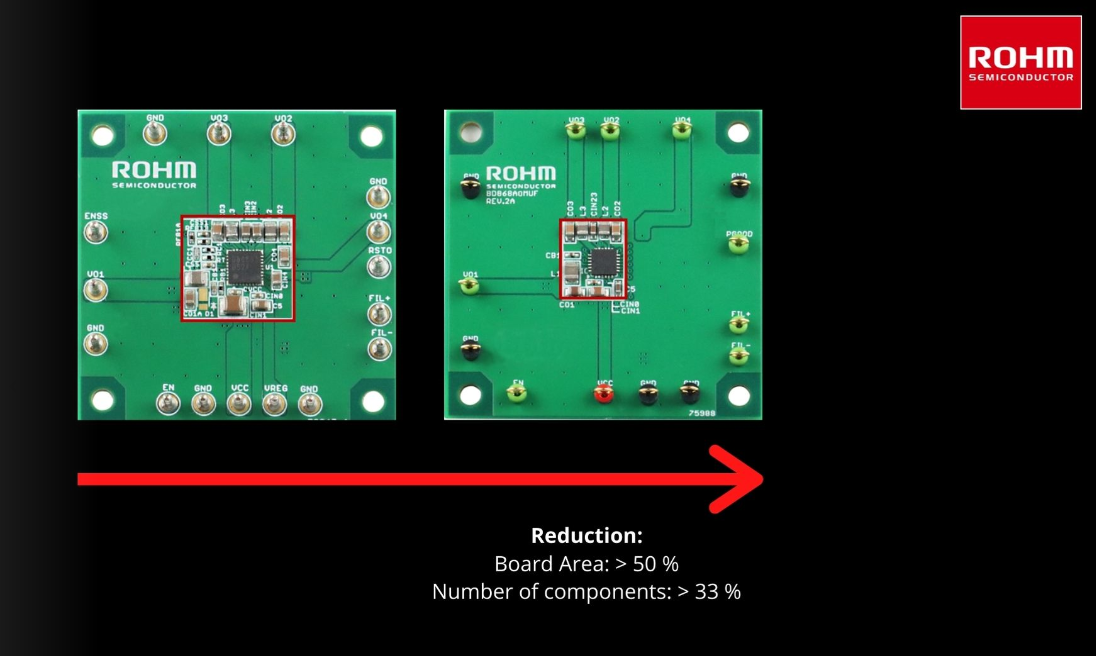 ​​​​For these situations, ROHM provides the PMIC BD868A0MUF-C, for example, which provides all the required power supplies in one 3.5x3.5mm chip. “The device generates the supply voltages for the components, supervises such supplies, includes redundancies for highest functional safety level, follows ISO26262 and is AEC-Q100 qualified”, says Maurer.

In the past, these 100 processors were distributed all over the car, each dedicated to one specific task. Today’s trend is integrating multiple of these functions into four to six electronic control units (ECUs) each with high processing power and the capability to serve numerous functions – quasi in parallel. These ECUs need to be mounted on central places in the vehicle, to ensure proper inter-connections with reasonable cable length. ​​​​These mounting areas are limited in the vehicles and the space is often very limited, so that the silver boxes need to be designed under strict area limitations. “Form factor and thermal challenges which are not neglectable” explains Michael Maurer. “ROHM Semiconductor will help to solve such challenges with highest integration levels and technical innovations” adds Maurer.

In addition to the space requirements of the application, the costs always play a major role, of course. The reduction of the bill of material (BOM) – above all the elimination of external components such as resistors, capacitors and inductors – decreases both the required space and the costs. Innovative solutions are needed to achieve this.

At first glance, it may does not seem reasonable to save money by eliminating components whose costs are only at the cent level or even lower anyway, such as capacitors. But Michael Maurer emphasizes: „It would be wrong to only think of the capacitor itself.” Not only one saves the cost of the component, but also on the purchasing, the design-in, the assembly, the visual and functional inspection of the solder joint, and much more. Each of these points incurs costs that sometimes exceed the cost of the component itself many times over. So even sub-cent components such as small capacitors play a cost role.

Another important aspect of miniaturization is the integration of more and more features into ICs. This also reduces the BOM and the costs, and incidentally makes it easier for the application designer. “Take ROHM's PMIC for the NXP i.MX 8M family, for example: In order to design the power supply for this processor from discrete components, the developer would have to read hundreds of pages of processor specifications,” explains Michael Maurer. ROHM has already done this work and developed the PMIC. The user can simply use it and does not have to think about the power supply.

The integration of additional features is increasingly related to functional safety, especially in the automotive sector: Automotive PMICs, for example, must ensure that their output voltages are always within the specified range. Traditionally, supervision ICs are needed to monitor this. ROHM will offer PMICs in with functional safety features integrated, including redundant reference voltages and double clocks trees. Such integrated features will allow the designers to achieve the requested application safety level with manageable design effort and reasonable cost. “Done business, as the BOM will be reduced, the total cost of ownership for the power generation is not increased and the PCB area is as small as possible” says Michael Maurer.

ROHM's goal is not only to miniaturize its own components. Instead, the customer should be given the opportunity to further miniaturize his or her own application with the help of ROHM products – with as little development effort as possible.

For this reason, ROHM offers, among other things, PMICs that are custom-made for specific Systems-on-a-Chip (SoCs). These contain all the power supplies that the respective SoC requires, with the right parameters and sequencing. But this is not where ROHM’s technology solutions stop. Instead, the company is increasingly focusing on a more flexible solution: Modularly, several ICs are connected to each other, which in the end behave like a PMIC that is precisely tailored to the respective application, including but not limited to the SoC of the customer. "We want to get away from this narrow-tube view on the SoC," as Michael Maurer puts it. This enables further miniaturization.

Outlook and limits of miniaturization

In the next couple of years, several technological developments will certainly continue to drive the trend of miniaturization forward. But there are also limits to what is practically, economically and ecologically feasible: The most crucial issues revolve around thermal effects. As the semiconductor geometries will become smaller, the SoC supply voltage will drop and the efficiency per transistor is increasing, meaning more processing power per Watt. On the other hand, the thermal package capability at given form factors is not significantly increasing, so the overall power dissipation needs to be carefully handled. Thermal pads, thermal vias, heat pipes and so on are ways to try to solve the thermal problems, but there are applications with power dissipation which will request active cooling most people want to avoid. ROHM Semiconductor is currently working on PMIC solutions which will avoid such heat spots and provide more thermal balanced power solutions.

But there are other limiting factors: Above, we already described the PMIC BD868A0MUF-C, which ROHM is working on for automotive suppliers. The PMIC for satellite cameras in cars contains four voltage regulators and integrates features for functional safety to achieve the highest possible ASIL level. This is to be put into a 3.5x3.5mm package.

Michael Maurer explains that this solution is already pin-limited: “This means that so many features are accommodated on such a small footprint that no more pins are available with the given package requirements for further functions.”

But perhaps there will be new package options in the future to overcome these limits. ROHM will be among the first to apply them.