Finding a way to a new mobility

How e-mobility pays off for a ROHM employee There are three main reasons against buying an electric vehicle at the moment: the high price, a low range compared to conventional cars and not enough charging stations. Another important point is the origin of the power: Is it sensible to change to an electric vehicle to protect climate and environment if the electricity is produced by burning coal?

Many people are asking themselves these questions. One example is Peter Niederprüm, an IT employee of ROHM Semiconductor. Based on his daily working background at ROHM he knows first-hand how much is happening in the fields of e-mobility: ROHM is developing cutting-edge power semiconductors, for example based on silicon carbide (SiC). These are used among others in the inverters and on-board chargers of electric cars and in photovoltaic systems. Peter lives in Düsseldorf, Germany, with his wife and two children. Together, they want to contribute to climate protection – willing to change something in their lives. After a lot of thinking and preparing they recently got an electric car while still avoiding the current drawbacks of e-mobility. 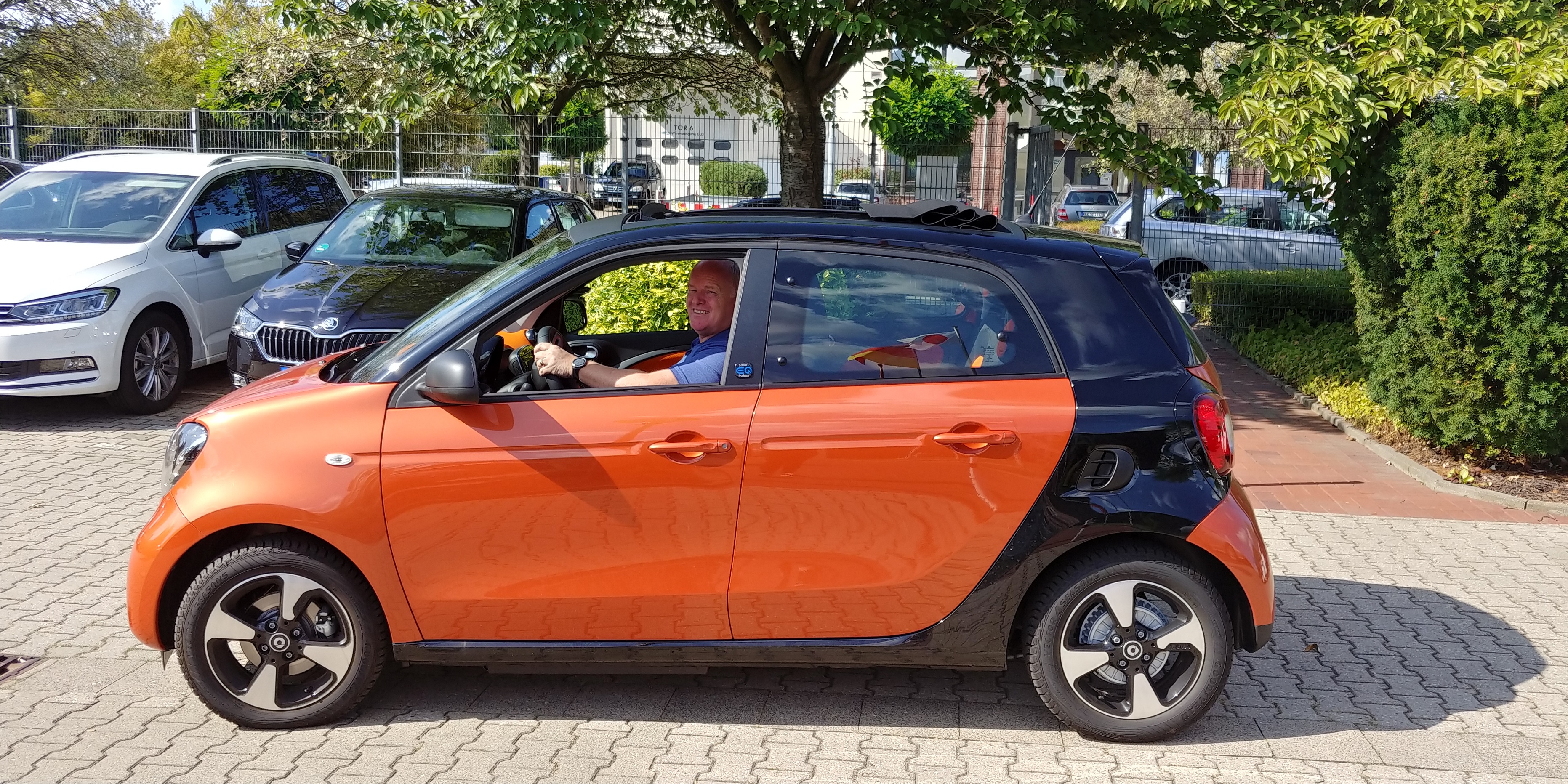 ROHM IT employee Peter Niederprüm has leased an e-vehicle.

Range never was an issue for Peter. His electric car goes for 120 km between charging, and that is enough for his everyday life. Going to work, taking the kids to sports and music lessons, and shopping don’t need much range. For going on holiday or for the other rare cases where the range is not sufficient, they still have a “big” car that runs on gasoline.

Photovoltaic on the rooftop

Unlike the range, the origin of the electricity was an important point for Peter. He wanted to produce the power himself. The only practical way to do that as an individual is to put a photovoltaic system on your rooftop.

As it is now, Peter’s photovoltaic system has one major disadvantage: It produces power exactly at that time, when it’s not needed. During daytime, when the sun is shining, the solar power is fed into the grid and the car is charged from the grid at night. But even with this disadvantage the system is profitable. With the family’s rather average power consumption of 12 kWh per day plus 7 kWh for the car on working days, the system will pay off after just seven years. After that the system will save money! To produce power himself, Peter Niederprüm has put a photovoltaic system on the rooftop of his house.

Peter and his family try to use as much of the self-produced power as possible. For that reason, they started to change their habits: Dish washer and washing machine are running when the sun is shining. When returning home, the car is no longer parked in front of the house. Instead it goes right into the garage and is plugged into the wall. So, the last sunrays of the day can be used to charge the car.

Another challenge is the big investment to get the photovoltaic system built. Peter decided he could afford that by not buying the car but leasing it.

In addition to the cost savings, leasing has another advantage: Who can predict which significance e-mobility will have in just a few years? Automotive manufacturers will bring a lot of new electric cars to the market in the upcoming years and no one can predict the evolving technical possibilities. Perhaps the range will increase drastically. If you want a new car by then, you can hardly sell your old electric vehicle at a good price. But that’s not a problem if you leased the car in the first place.

Peter’s "big" gasoline-driven car now leads a shadowy existence in Peter's family. It’s only used when absolutely necessary: when the range of the electric car is really no longer sufficient, or when ­ exceptionally ­ two cars are needed at the same time.

Peter doesn't just want to reduce his own contribution to climate change. He also wants to teach his children environmental awareness and make a social statement.

All in all, Peter is very pleased with his e-mobility project. But of course his way is not adoptable for everyone, it only works with his special conditions. Everyone has to find their own way to the new mobility. A lot of time and effort are needed. Peter spent weeks with calculations on profitability, insurance, fire protection, and all other things that need to be taken into account.

But he’s more than satisfied with the results. And he encourages everyone to do the same: “Find your way to a new mobility.”