For the future of e-mobility, we need new ideas and fresh concepts. Consequently, ROHM Semiconductor Europe supports electrical engineering students of the University of Ilmenau with their e-mobility project “Formula Student”.

For a long time, motor racing was a reliable source of developments that also advanced the cars of consumers. But with the dwindling future viability of the combustion engine, the importance of Formula 1 and the like is slowly diminishing in this respect.

This is the reason for ROHM Semiconductor's involvement in the Formula Student initiative. The company recently started supporting the initiative’s Team Starcraft of TU Ilmenau, Germany. 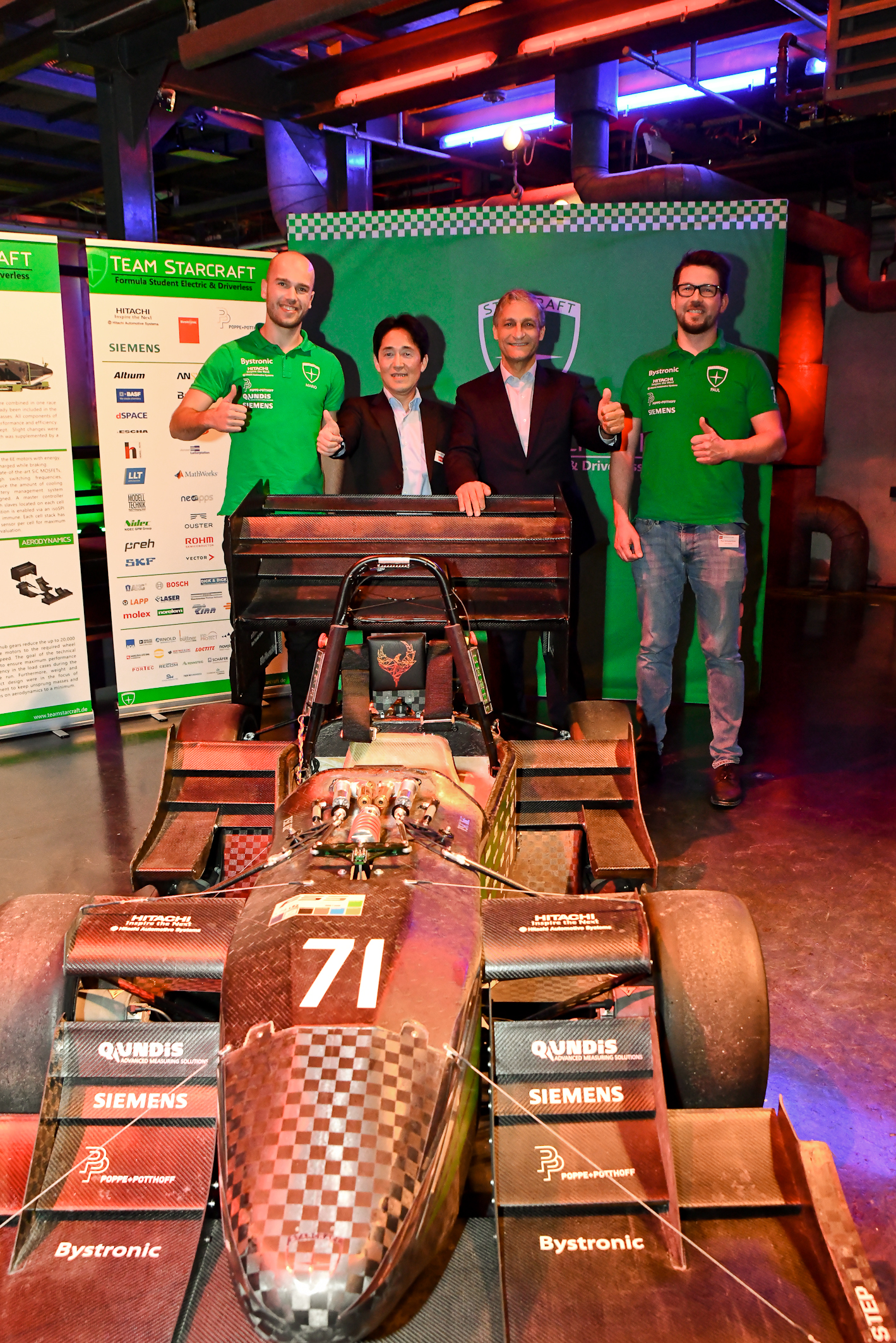 Formula Student is an international design competition for students. University teams from all over the world develop competitive racing cars including a suitable marketing concept within one year. Technical design, cost planning and the business model have to convince experts from industry and economy. The students’ constructions must perform on the racetrack.

On the track of the future of mobility

In 2017, the “Formula Student Driverless” initiative was introduced, in which students develop autonomous racing cars, highlighting the competition’s future-orientated concept. The new class supplemented the two earlier classes, Combustion and Electric, which differ in the drive technology used.

There are no professional drivers in Formula Student, but the students themselves drive the cars. Most student drivers have some background in cart sports, but they are amateurs.

Students from all disciplines

Team Starcraft e.V. was founded in 2006 at the Technical University Ilmenau. Since 2011 all cars of the team are powered purely electrically. Around 50 students make up the team. They come from a wide range of disciplines: Of course there are students from mechanical engineering and electrical engineering, but also from not so obvious fields such as media economics. Team Starcraft is dedicated to efficiency. This starts with the efficient use of resources and continues to the energy efficiency of the racing cars. Efficient is also the usage of just one car for the electric as well as for the driverless competitions. All components needed for the autonomous mode, like camera, LIDAR and control unit, can easily and quickly be built on and off the car.

Team Starcraft’s electric car especially distinguishes itself by its high amount of self-developed and self-made components. This includes aerodynamics and mechanics but also electrics and electronics. Several generations of the car required some small and big steps of upgrades to the technology. But a change of the regulations in the year 2018 led to a complete redesign of the car.

A major part of this redesign is done by Leon Loeser, a student of electric engineering at the TU Ilmenau who joined Team Starcraft since the beginning of his studies. He is responsible for the entire power electronics of the new car, which he developed on his own - the 600V battery.

Inside Team Starcraft’s racing car, ROHM’s inverters transform the direct current of the battery box into alternating current of the motors and regulate their output. ROHM’s SiC MOSFETs are located inside these inverters.

“This battery supplies the engines and the on-board power supply with energy. The battery management system monitors the voltage and temperature of each battery cell and ensures safety during charging and driving. Also, four inverters transform the direct current of the battery box into alternating current for the motors and regulate their output,” says the 22-year old student.

The design is based on the latest ROHM SiC MOSFETs and enables an increase in the system efficiency compared to the previous car while simultaneously saving installation space and weight. ROHM provides these SiC transistors and the corresponding gate drivers through the sponsorship.

because of their price performance

behavior and their switching rate.”

But even before the negotiations with ROHM began, Leon made use of the company’s SiC MOSFETs. “I chose ROHM components because of their price-performance ratio, their good thermal behavior and their switching rate,” explains Leon.  Another important factor was the availability: “Since 48 of these SiC MOSFETs are built into the car, I needed the possibility to order larger numbers,” adds Leon. 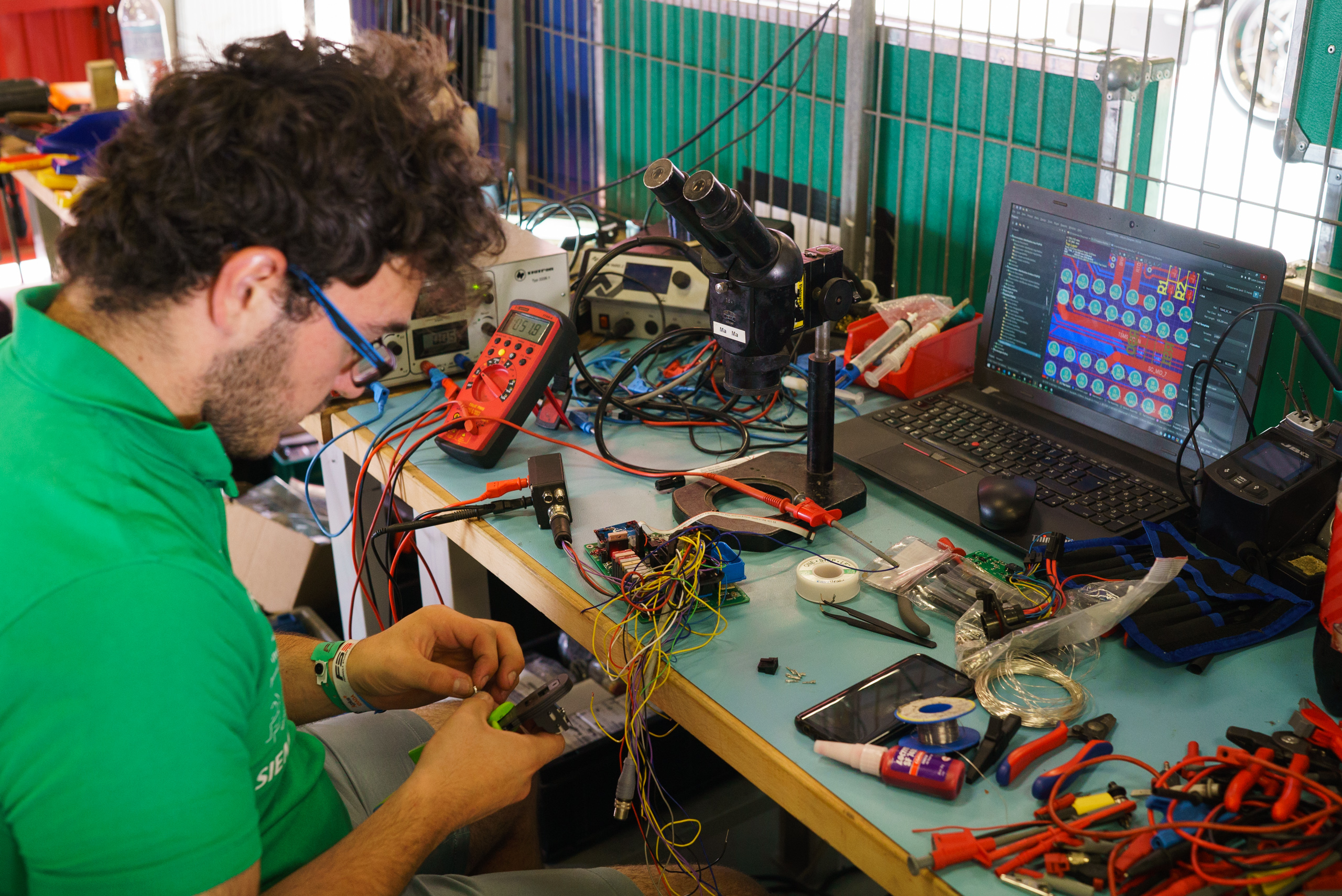 For high-quality performance of their racing car, Leon Loeser and his team regularly test the functionality of the car-integrated products.

All in all, there are almost 60 ROHM products built into the car, possibly there will be even more in the future. But the company’s support does not stop at the component level: The team also receives design support from ROHM. “Our team can contact the ROHM PowerLab staff at any time to get hints for trustworthy product suggestions as well as troubleshooting for the design,” says Leon.

Looking forward to the next season

When asked about his personal highlights of almost four years of Formula Student, Leon smiles: “It’s always nice when everything is working smoothly. It’s the “simple” things, like the wheels turning for the first time, or the battery charging the first time without a bang and without starting to smell. Especially the battery is always a cause for concerns: In the worst case of a short-circuit event, 1 MW of power could be unleashed. That’s enough to get a bit nervous.” Ready, steady, go: Leon Loeser (r.) and his team make the final check of their car before the race begins.

Now, the new car is finished and driving smoothly. What is now left to do is testing: What could go wrong, what could be optimized? Are the simulations correct, will parts break off? The test phase will decide what will be possible in next season: In the late summer of 2020, the next competitions will take place all over the world. With the new electric car, Team Starcraft wants to participate in as many events as possible.

The goals are always high: Team Starcraft wants to win. And the team knows its racing car is good: “It’s lightweight and fast. After the testing there will be driver trainings and we hope that nothing will go wrong,” says Leon. And then, nothing will stand in the way of winning.

The Formula Student is an international design competition for students. The team’s core task: designing and manufacturing a single-seat formula racing car, while considering the economic aspects of automotive engineering as well.

Formula Student Germany takes place every year at the motor racing circuit “Hockenheimring” in Baden-Württemberg, Germany, where the student teams meet to compare the race cars. Similar events take place all over the world.

The three classes follow the same regulations with just minor modifications reflecting the different powertrains. In the Formula Student Electric, the regulations do not impose any restrictions on the type (direct current or alternating current) and number of motors, only the maximum voltage is limited to 600 V DC. The maximum power that can be drawn from the batteries at any time is 80 kW. All types of batteries and capacitors may be used as energy storage devices, but no high-temperature batteries or fuel cells may be used.

Compared to the predecessor models, essentially all components of the new car of Team Starcraft have been redesigned. This includes the self-made inverters based on SiC MOSFETs by ROHM.