Motors are indispensable electric components that serve as the power source for a variety of devices including ACs, washing machines, and other home appliances as well as machine tools used in factories. According to Top Runner Motor published by the Japan Electrical Manufacturers’ Association, the power consumed by motors accounts for approximately 50% of the world’s total consumption. Motors, which can be considered a symbol of modern civilization, are entering a new era of accelerated application expansion and technological evolution. In the near future, the application range for motors is expected to expand rapidly, into EVs (Electric Vehicles) and robotics. This will increase the demand for smaller, lighter motors that provide greater performance, efficiency, and reliability.
Modern motors are no longer operated by simply turning on the power supply, but by precisely controlling the driving power to fit application requirements. No matter how advanced the motor is, however, it cannot operate with high performance and efficiency without a motor driver designed to maximize its potential. Drivers must therefore evolve in step with motors. At the same time, the semiconductor components that make up the driver circuit, such as the control MCU, inverters, gate drivers, and power devices, must meet application needs as well.

The electrification of cars has become a worldwide trend

From the internal combustion engine to EVs that use electric motors, the automotive industry is in the midst of a major shift in power source, exemplified by the rapid evolution of motor control technology.
Governments around the world are actively promoting EVs in the interest of combating global warming and stimulating the industry. These initiatives are not merely intended to gradually increase adoption through tax breaks and subsidies, however, but are drastic measures meant to prohibit the sale of gasoline and diesel powered vehicles. Already many EU countries, including the UK and France along with China, India, and others, have declared timetables for eliminating the sale of internal combustion cars.
In the EV sector various technological developments are currently underway, such as extending the cruising distance, making the charging process more convenient, and reducing purchase costs. Because naturally, as long as EVs are more expensive and less convenient than their gasoline-powered counterparts, they will fail to gain traction. As a result, a range of innovative technologies are being tested with an eye towards widespread adoption. Motors for EVs differ from those in home appliances and machine tools in two major ways. The first is high output power. For example, the drive output of an AC motor is typically on the order of 3kW, while the main drive motor in an EV may be rated at 150kW. The second difference is the need to cover a variety of operating conditions, such as accelerating from startup and changing speeds while driving on city streets and highways – all while maintaining high efficiency.
Generally, supporting a wide range of operating conditions makes it difficult to clearly define target characteristics for the motor and achieve high efficiency. But since improving power efficiency is essential for extending driving distance and minimizing environmental impact, a technological breakthrough is needed. At the same time, reducing the size of the motor increases the amount of interior space, while less weight can significantly improve driving performance and range, making these important aspects as well. To meet these stringent requirements, EVs are adopting synchronous type AC motors enabling precise control (i.e. rotational speed, torque) that make it relatively easy to achieve high efficiency in a compact, lightweight form factor.

With synchronous motors, motor speed and torque can be increased by raising the drive voltage of the motor. At this time, if the output is increased by raising the voltage without increasing the current, the loss in the motor can be reduced and efficiency improved. Also, the drive power frequency is controlled by the inverter to adjust the rotational speed. Precise control of the motor’s rotational position and drive power is critical for improving efficiency while expanding the rotational speed and torque ranges.
Inverters for EV motors therefore demand technologies that enable high accuracy control at high voltages yet still ensure high efficiency in smaller, lighter form factors. However, in conventional inverters that use Si-type IGBTs as switching elements there is little room left for improvement. Thus, innovation has to happen at the device level, involving SiC and GaN. 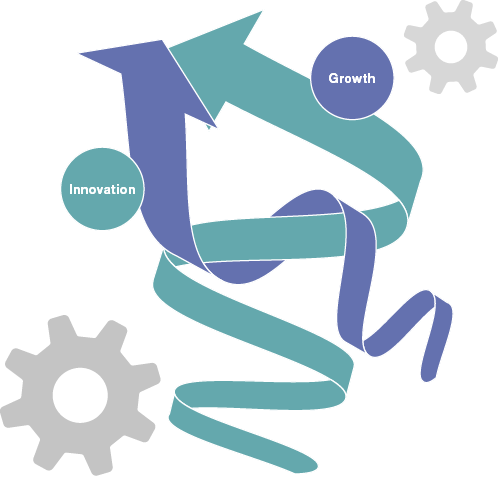 Improving efficiency while decreasing size and weight through electromechanical integration

Technology for integrating the motor and driver circuit into a single module is being developed. This fusion of motor and electrical circuitry that produces mechanical movement is called electromechanical integration.
Combining the mechanical and electrical components achieves a compact, lightweight, low cost drive system that delivers high efficiency. Integrating an inverter into the motor will make it possible to use shorter connecting cables, reducing both size and weight along with loss. At the same time, the number of electrical contacts is reduced, and eliminating the process of bending the cables using machine tools and robots results in greater reliability. This lightens assembly load by decreasing the number of steps required as well.
In the automotive industry, prototype testing for power steering and window applications has already begun. And the trend towards electromechanical integration is currently expanding to electric drive motors in a variety of fields, including home appliances, machine tools, and robotics.