The Journey of Electricity

How electricity reaches our homes and everyday devices 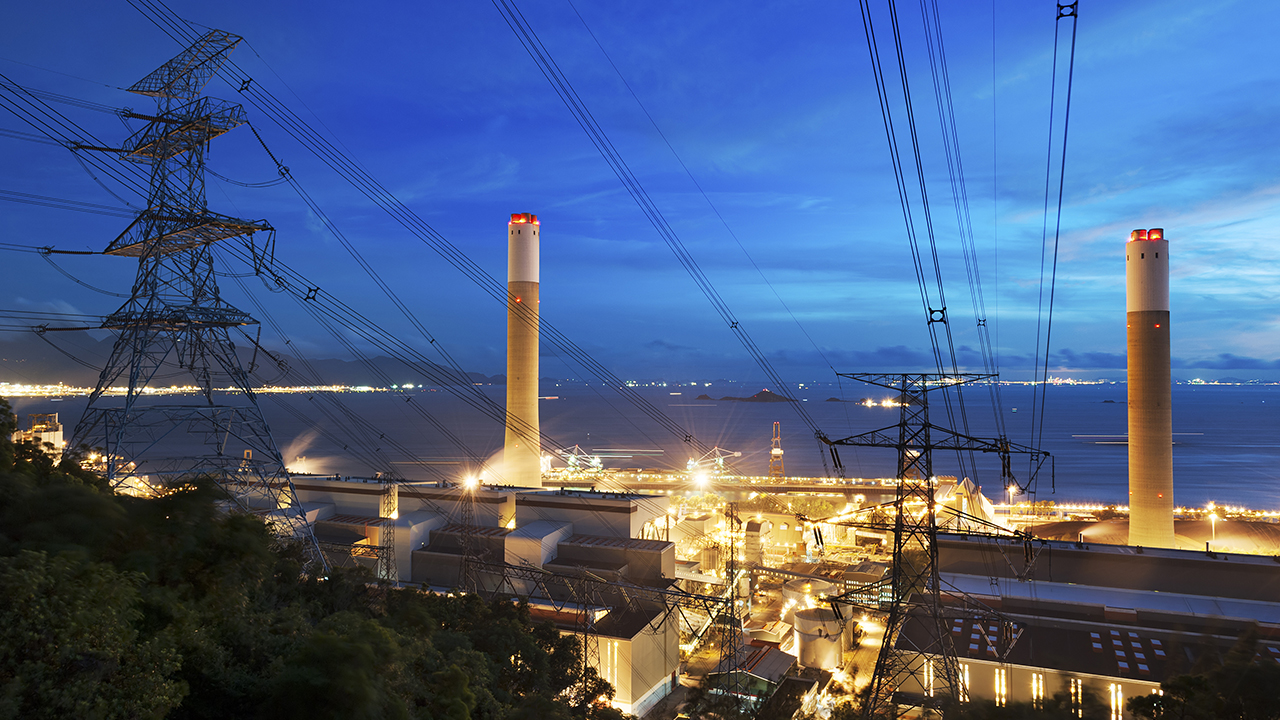 Electricity brightens and enriches many facets of our lives.

Here, we will explain the process of how electricity is produced and delivered to our homes and everyday devices.

How electricity reaches our homes

Simply turn on a switch and devices begin to work. Electricity is an indispensable part of daily life, but there are three major steps that must be carried out before it reaches our homes in a usable form.

The first step is generating electricity. The next is the process of safely and efficiently transmitting and distributing generated electricity through power lines and substations to where it is needed. And finally, electricity must be converted to a level that can be used by devices.

Electricity is generated at power plants. However, the term ‘power generation’ can refer to a variety of methods and resources. 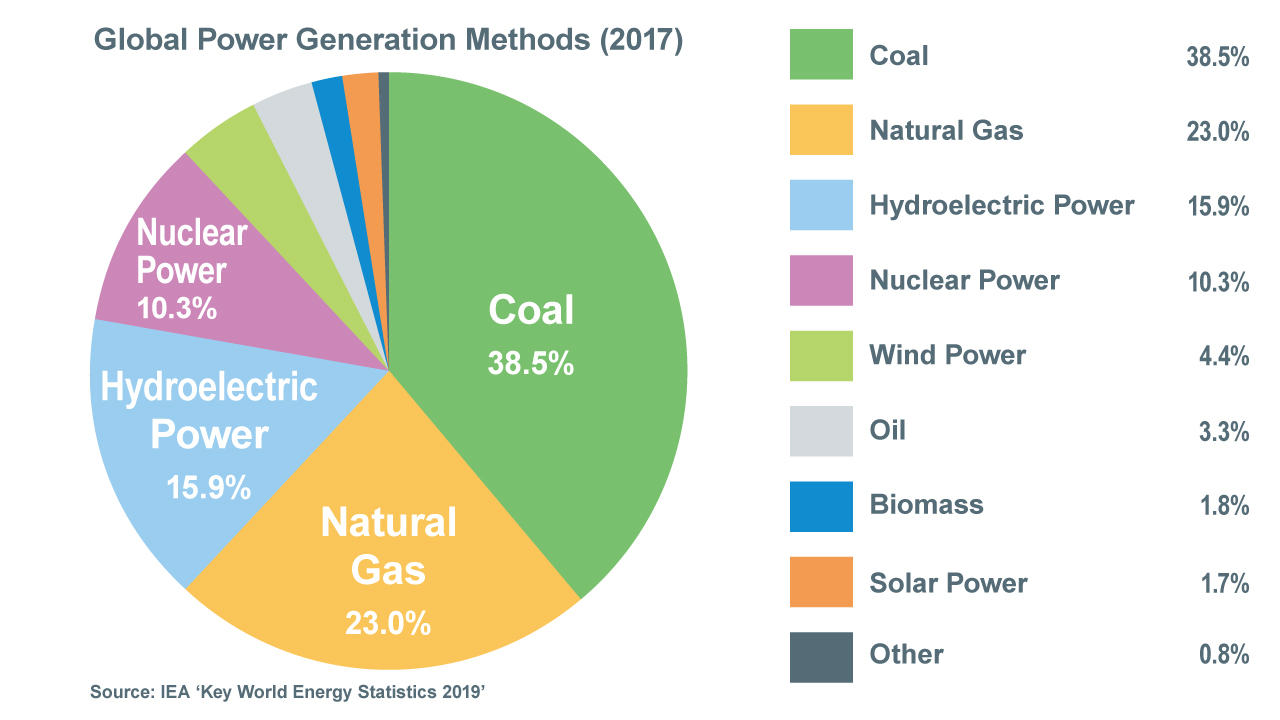 Despite being one of the world’s largest energy consumers in the world, Japan has an energy self-sufficiency rate of less than 10%. This is because most of the energy resources needed for power generation, such as oil, coal, natural gas, and uranium, must be imported from overseas.

Meanwhile, according to data prepared by the Japan Agency for Natural Resources and Energy based on a survey by the International Energy Agency, the energy self-sufficiency rates of developed countries overseas include 92.6% for the US, 68.2% for the UK, 52.8% for France, and 36.9% for Germany.

In the US, the shale revolution of the late 2000s that led to a large increase in domestic production of crude oil and natural gas, together with an increase in renewable energy sources, have resulted in a high level of self-sufficiency. For the UK, however, although still at a high level, crude oil production is gradually declining due to depletion of the North Sea oil fields, which is the country’s main energy source. At the same time, supplying over 70% of electricity from nuclear power allows France to stabilize production without relying on fuel imports from overseas, leading to a stable self-sufficiency rate of around 50%. In contrast, Germany’s self-sufficiency rate is lower than other countries, but maintains its rate by promoting the introduction of renewable energy while shutting down its nuclear power plants.

As you can see, the energy situation and approaches taken can vary significantly from country to country, but in any case, it is necessary to secure stable and economical power by efficiently combining multiple methods of power generation rather than simply relying on a specific method.

So, what are the characteristics and challenges of each power generation method?

The increased adoption of renewable energy

Solar power is probably the first thing that comes to mind when thinking about renewable energy.

In recent years, solar panels have been installed not only on corporate buildings and private factories, but also on the roofs of private homes, and it is not uncommon for households to generate solar power. Incidentally, solar cells are made by superimposing two types of silicon semiconductors (n-type and p-type). 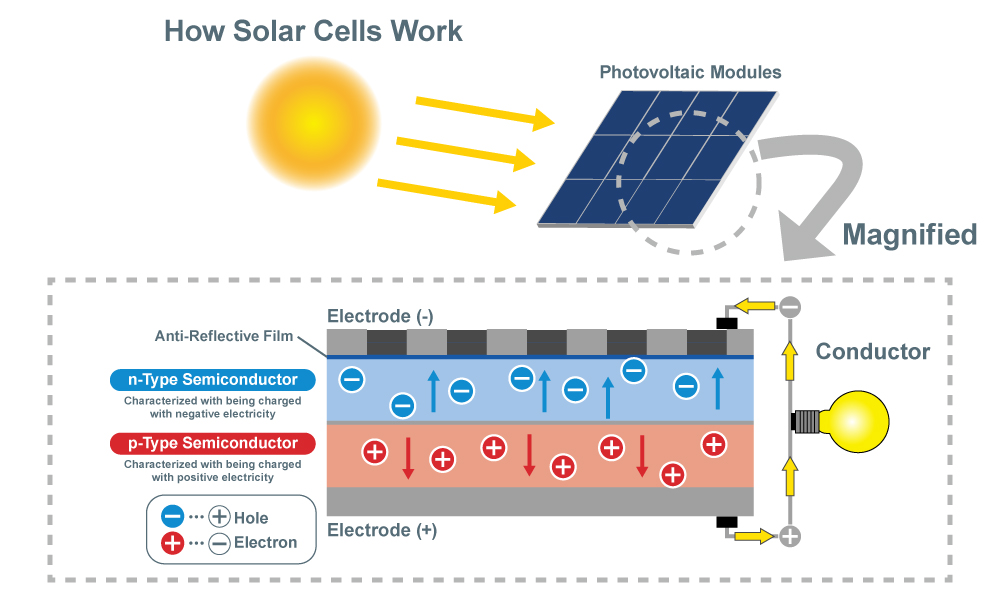 The result is a battery-like structure that allows DC current to flow.

Electricity generated at the power plant reaches our homes through multiple substations, transmission and distribution lines, and transformers.

Newly generated electricity is transmitted at extremely high voltages ranging from 275,000 to 500,000 volts in order to reduce transmission losses. However, to use electricity in our daily life, this voltage must be reduced to the appropriate level.

For example, 220-240V is used in European households. In the US, 115V or 120V is common in the home, depending on the state, while 208V or 230V is typically used in offices and data centers. And in Japan, 100V is used in homes and offices and 200V for factory equipment, which is actually quite rare in the world. In any case, since the voltage is not usable as-is, it goes through substations that drop the voltage to different levels depending on the application. 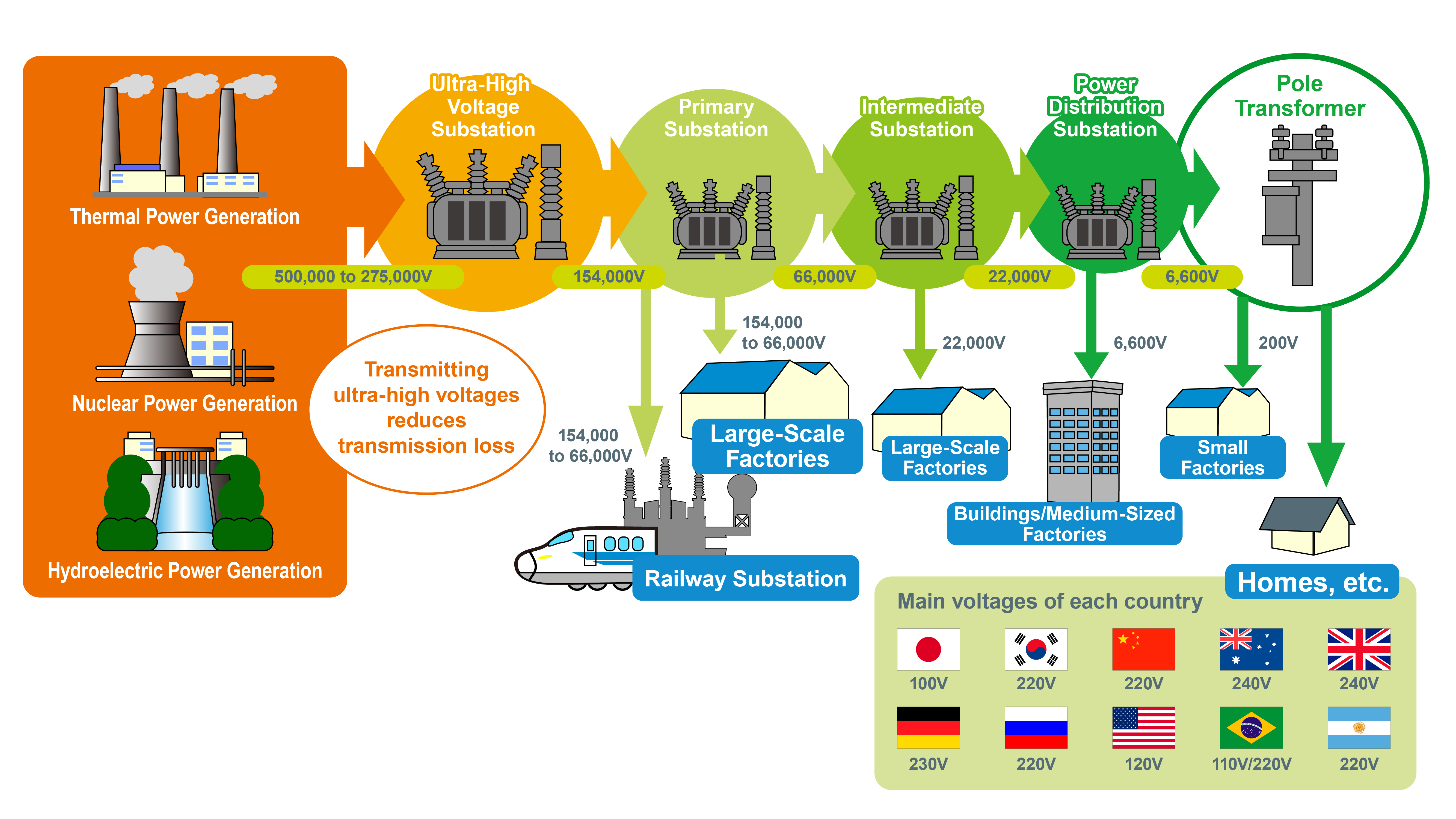 This is referred to as transmission loss.

To use energy efficiently, it is necessary to reduce transmission loss as much as possible.

The rate of transmission loss varies greatly from country to country. Among developed countries, the transmission loss in the US is estimated to be 6%, 5% in Germany, and 3.4% in Japan. Although 3.4% may seem small, this is the equivalent of 7 thermal power plants. And according to a 2016 study by a team of researchers from the University of Maryland and Johns Hopkins University in the US, power transmission losses in India are about 19%, 16% in Brazil, and over 50% in countries such as Haiti, Iraq, and the Republic of Congo.

The power that finally reaches our homes from the power plant cannot be used as-is, however.

Household electricity is drawn from distribution poles, but the electricity that reaches these poles still has a voltage of 6600VAC. To be able to use this electricity, transformers installed in the poles reduce the voltage to 100V or 200V suitable for residential use.

Electricity converted to household voltage through the pole transformer first flows to the power meter to measure the amount of electricity used. From there, various further transformations take place depending on the application. 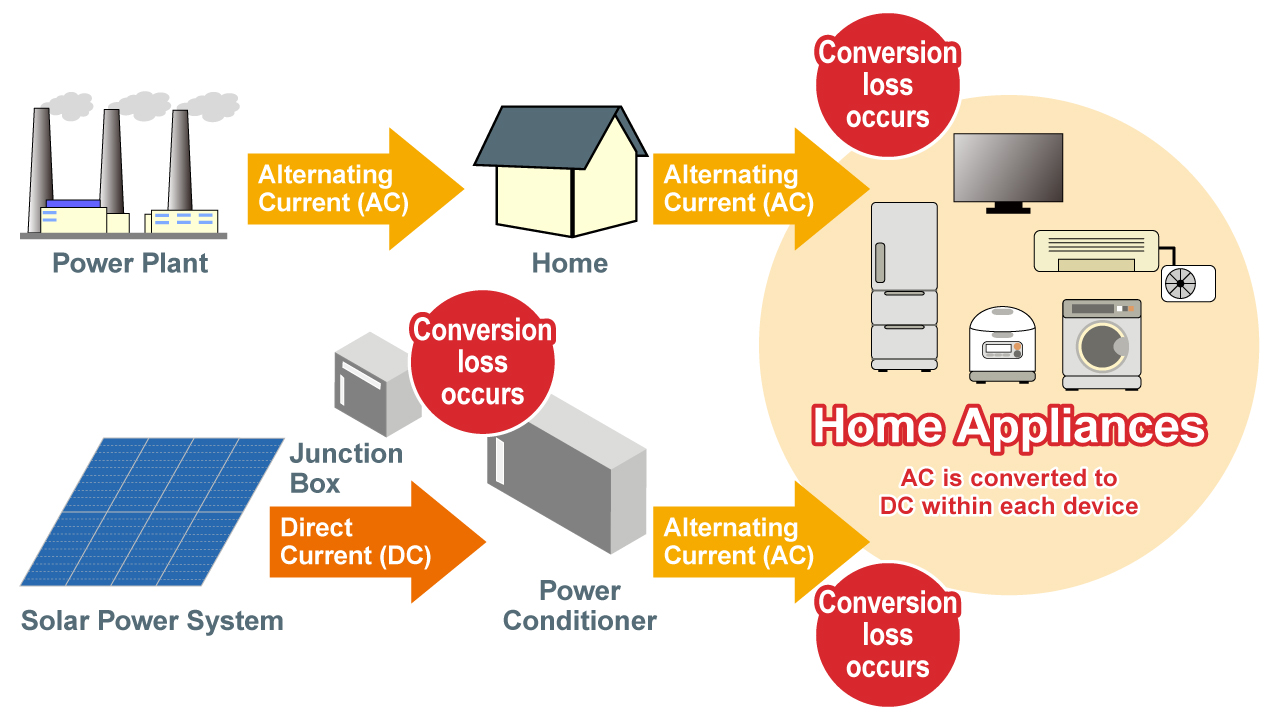 As appliances and other devices require different voltages, step-down and step-up operations are performed as necessary, incurring additional conversion losses at each stage.

Reducing conversion loss will also have a significant impact on the spread of renewable energies such as solar power in the future.

For example, the energy conversion efficiency of a typical thermal power plant is around 40% while the latest power plants are capable of 55% or more. However, the power generation efficiency of a standard solar power system is only about 20%. It is technically possible to go beyond this, but the current cost is too high to make it practical for general use.

Companies are continually developing new technologies and carrying out initiatives to minimize conversion losses and make more efficient and effective use of energy.

Power devices (power semiconductors) play a central role in this. But it is becoming increasingly difficult to expect innovation from technologically mature Si (silicon) devices. As a result, the semiconductor material that is attracting attention as a breakthrough replacement for silicon is SiC (silicon carbide), which features superior conversion efficiency.

ROHM is fully committed to developing not only silicon-based transistors (MOSFETs, IGBTs) and diodes, but SiC MOSFETs and SiC Schottky barrier diodes as well for the power device field. As an SiC pioneer, ROHM was among the first in the industry to develop SiC power devices and the first in the world to release SiC MOSFETs. This significantly reduces loss during power conversion, contributing to higher efficiency and miniaturization in power systems such as solar power generation systems, power supplies for industrial equipment, and EV chargers.