What are EVs (Electric Vehicles)?

A primer on the differences between conventional gas and hybrid cars

Electric vehicles (EVs), once a generic term that referred to any vehicle that runs on electricity, is now generally reserved only for cars. In this article we will introduce the mechanism of EVs and how it compares to traditional gas-powered and hybrid cars (HVs). 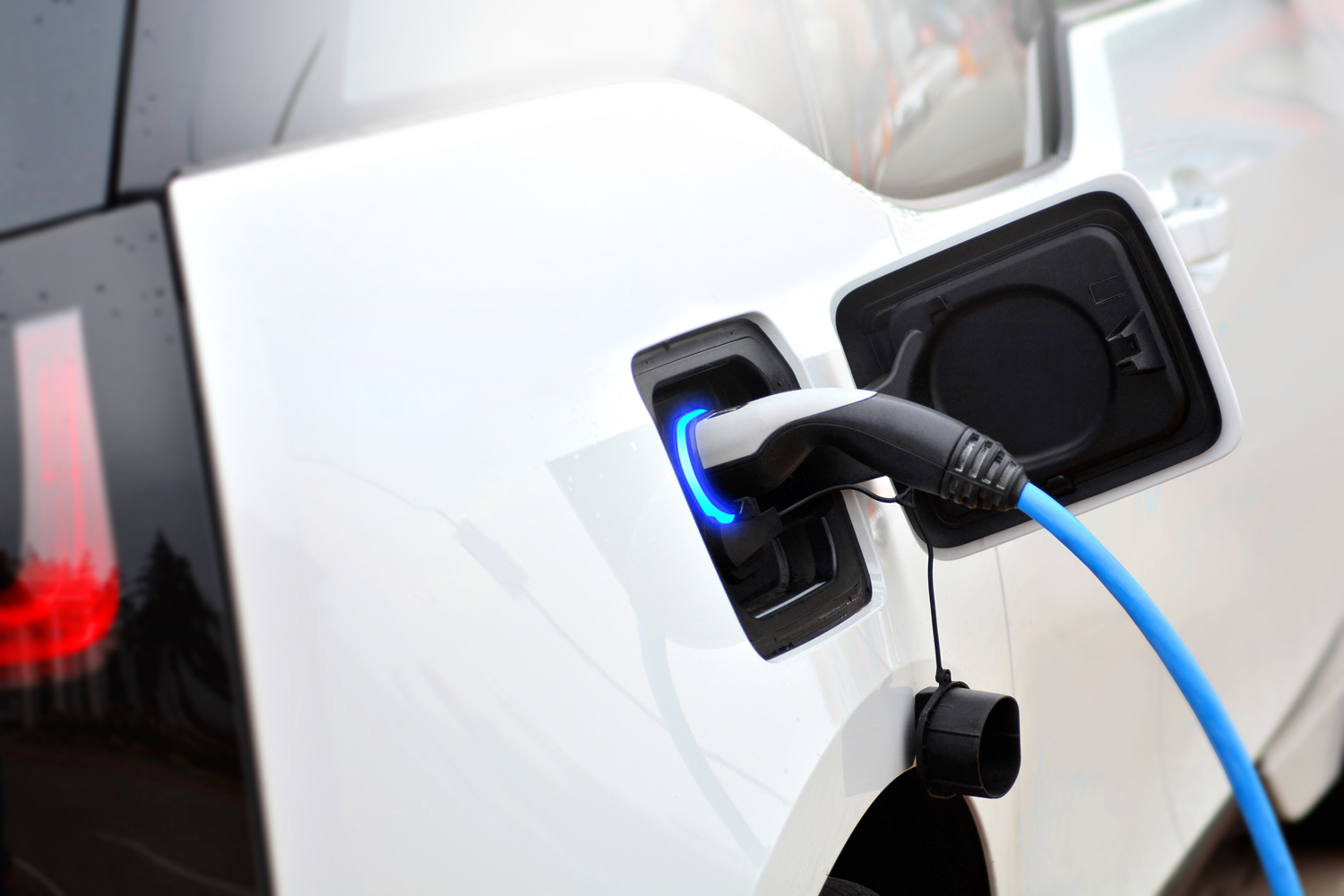 First, we will go over the mechanism of EVs. 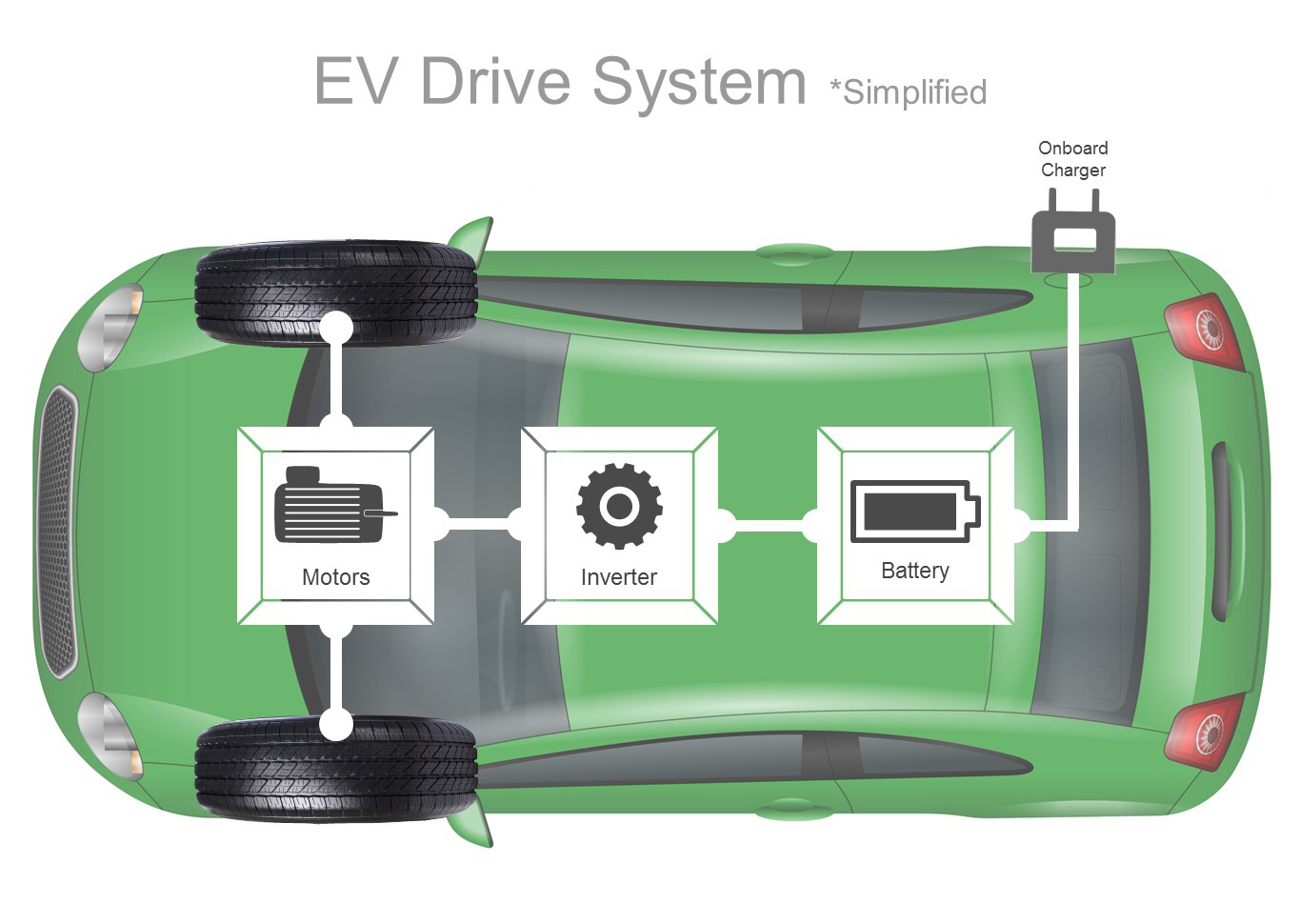 Conventional cars are equipped with an engine that runs on energy generated by burning fossil fuel. EVs replace the gas and engine with electricity and motors.

EVs provide a host of benefits. Let’s look at them from the consumer’s perspective.

As mentioned above, EVs use electricity instead of gasoline. Currently, electricity is cheaper than gasoline, and charging at night can save consumers even more. For example, assuming a monthly mileage of 1,000km, driving an EV can save around 7,000 yen compared with a gas-powered car (at a rate of 141yen/liter of regular gas).

*1: Electricity cost is an indicator showing the ‘mileage’ per kilowatt hour (kWh) of a battery.
*2: Electricity charges may vary depending on the power company and area

In Japan, car ownership typically entails 3 different taxes: a vehicle acquisition tax, vehicle weight tax, and vehicle tax, but in the case of EVs tax incentives in the form of a Green Tax reduction and Eco Car exemption are offered.
There is also a substantial subsidy system. Consumers can receive a government subsidy called a CEV (Clean Energy Vehicle) by submitting documents after purchasing an EV.
In overseas countries as well, including the UK, France, and China, governments are currently promoting EVs, with various systems already in place. For example, in China, which recorded sales of 336,000 New Energy Vehicles (NEV) as of 2016, the central government provides subsidies ranging from 25,000 to 300,000 yuan (400,000 to 5 million yen), depending on the type of vehicle. Subsidies are also offered by local municipalities.

3) Good for the environment

EVs are classified as one of the next-generation of eco cars characterized by their low environmental impact. Since no exhaust gases containing carbon dioxide or air pollutants are emitted, they are expected to contribute to the prevention of global warming.

EVs do present some drawbacks for consumers, however. Practical operation of EVs requires charging facilities. Although public charging stations are available, installing a charge system at home is necessary to ensure there is adequate charge for daily use.

The cruising distance of EVs is limited by the capacity of the onboard batteries. Manufacturers are working to improve travel range by improving battery and conversion efficiencies, with some EVs advertising a range of 400km on a single charge. Of course, this poses no problems for daily commutes and errands, but consideration must be given to the battery range when traveling longer distances.

The number of EV models is far fewer than standard cars, which inherently limits the range of available functions and designs. And in Japan the adoption rate is especially low, so any trend will be quite noticeable. However, in the US and other countries where the demand for EVs is increasing, the number of options and styles continues to expand.

Although EVs are being hailed as the cars of the future, the first prototypes date back to the 1830s. This even predates gas-powered (internal combustion) vehicles, which originated in 1880.
However, EVs didn’t see a resurgence until the 1990s, when interest in the global environment began to grow. Since they use ‘clean energy’ that minimizes environmental impact, they have become popular with eco-conscious consumers.
EVs are also expected to play an active role as energy storage devices (power sources) in the event of a disaster. For example, during emergencies such as power outages due to an earthquake, where they can also be used to transport medical equipment and other necessities.

At this time let’s look at the distinguishing features of different EV technologies currently available. 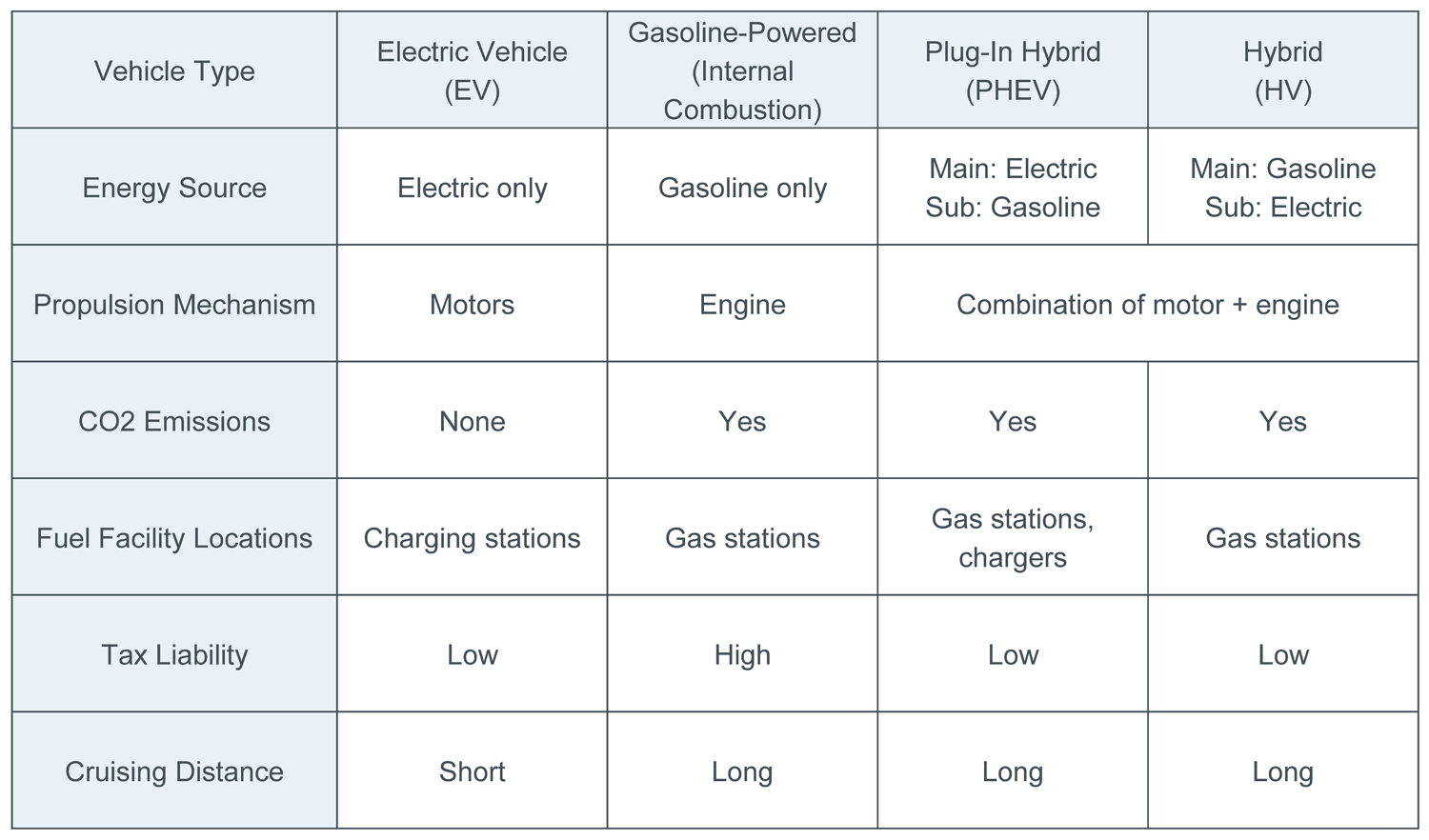 Perhaps the biggest difference between EVs and conventional vehicles is the power source. EVs use motors whereas gas-powered cars employ an internal combustion engine.
EVs provide low running costs such as fuel and taxes. In addition, they do not emit harmful gases such as CO2. On the other hand, gas-powered cars provide a superior cruising range and feature a wider selection of models and features.

Differences between EVs and HVs/PHEVs

Hybrid and plug-in hybrid vehicles adopt features of both EVs and conventional cars. Unlike EVs which rely solely on motors, they operate using a combination of engine and motor. This eliminates concerns regarding battery power when traveling for longer distances between charges.

* Differences between HVs and PHEVs

Both HVs and PHEVs are equipped with both an engine and electric motor. Although the exact mechanism will differ depending on the model, typically the motor is used from startup to medium speeds, then the engine takes over. However, since HVs cannot be charged externally, they can simply be considered gas-powered vehicles equipped with an electric motor.
In contrast, PHEVs can be charged from an external power source, allowing them to travel greater distances on electricity only. During electric-only mode the mechanism of propulsion is the same for both types.

Driving the future of electric vehicles with SiC power devices

Although EV sales are on the rise, widespread adoption will depend on making more efficient use of electricity. The solution is SiC power devices, which are semiconductor components comprised of silicon and carbon. SiC delivers superior power conversion efficiency, making them ideal for use in EV chargers and battery inverters.

SiC provides a number of benefits, including higher efficiency and greater miniaturization.
For example, the following are achieved when incorporating SiC power devices in an EV inverter.

Inverters frequently switch power in order to change the rotational speed of the motor. SiC is capable of reducing power loss during inverter switching. The result is more efficient power conversion, extending the cruising range and helping to decrease electricity costs.

2) Greater miniaturization: Reduces the size of the vehicle body and drive system

Improving power conversion efficiency minimizes generated heat, making it possible to reduce the size of both the cooling system and inverter. This contributes to smaller EV drive systems and even the vehicle body itself.

ROHM started fundamental research into SiC power devices in 2000 and in 2010 began production of SiC Schottky barrier diodes (SBDs), followed by becoming the first supplier to offer SiC MOSFETs, and continues to lead the industry in technology development.