ROHM's BD9E300EFJ-LB is a synchronous rectification step-down DC/DC converter equipped with 40 V withstand voltage input having built-in power MOSFET for switching. Efficiency improvement of power MOSFET is attempted by adoption of Nch-MOSFET at both upper and lower sides. Concerning this composition, the diode necessary for bootstrap for producing gate drive of upper-side Nch-MOSFET is also built-in. Low number of components is also evident from the example of circuit in Fig. 1. Further, acceleration of switching action to 1 MHz enables use of compact inductor and capacitor. Its principle is shown below.

In order to downsize an inductor, it is usually necessary to reduce inductance, but that causes ripple of inductor current to become larger and necessity of large capacitor for output to occur (Fig. 3). 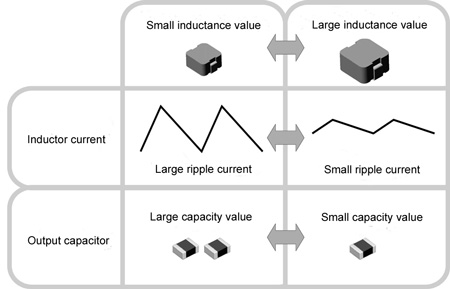 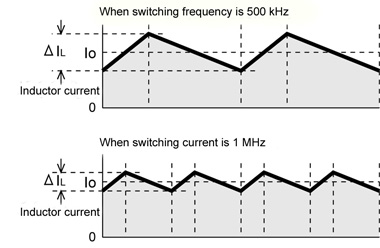 Although there is a trade-off relation between switching frequency and switch MOSFET loss as shown above, the most advanced BiCDMOS process is adopted in BD9E300EFJ-LB to optimize balance between the two by designing with switching frequency of 1 MHz.

The IC of asynchronous rectification system, which has been main stream of 24 V rail power supply system, uses MOSFET as the high-side switch and schottky diode as the low-side switch (Fig. 7). BD9E300EFJ-LB is produced by the most advanced BiCDMOS process of 0.35μm rule. Although the built-in switch part is composed of Nch-DMOS FET and usually there is a trade-off relation between high withstand voltage/low on resistance and low capacity gate, 40 V withstand voltage, 2.5 A current capacity, low on resistance of 170 mΩ and low gate capacity capable of 1 MHz action are realized. Because of this, heat generation is low even in the case of high frequency switching action.
In addition, since a package with its radiation pad exposed on its rear surface is adopted to enable efficient radiation even of the heat generated in IC chip, even a small package can be used at ease without fear of heat generation.

ROHM's BD9E series is a new-generation solution that replaces asynchronous rectification (diode rectification) system which has long been mainly used in industrial equipment.
BD9E300EFJ-LB / BD9E301EFJ-LB and BD9E100FJ-LB / BD9E101FJ-LB are synchronous rectification step-down DC/DC converters of 1ch equipped with 40 V withstand voltage input. Efficiency of power transistor is enhanced by adoption of Nch-MOSFET at both high-side and low-side. In relation to the composition, a diode which is necessary for the bootstrap that forms gate drive of high-side Nch-MOSFET is also built-in.
Since the main difference among the four kinds is that output current of BD9E300 / BD9E301 is 2.5 A and that of BD9E100 / BD9E101 is 2.5 A and that of BD9E300 / BD9E301 which handle larger power.
In addition, BD9E300 and BD9E100 are designed with switching frequency of 1 MHz. On the other hand, that for BD9E301 and BD9E101 is 570 kHz because when step-down ratio is high, switching loss increases resulting in toleration of no heat generation and inability of maintaining minimum on time with quick switching frequency. They are designed laying weight on efficiency rather than solution size (lower switching frequency decreases switching loss) and to enable customers to select switching frequency that matches their use condition.

Now that consciousness of energy saving is rising in every field, power devices and power supply ICs capable of dealing with large power utilizing semiconductors realizing energy saving are progressively adopted also in applications for industrial equipment dealing with large power. Further, when dealing with large power, withstand voltage that is higher than input voltage is required in order to prevent damage even when sudden surge voltage due to thunder, etc. is received.
ROHM is currently developing ICs with even higher withstand voltage to match such needs, and will continue to expand this DC/DC converter series prepare a wide variety of lineups to contribute to various markets.

(This article was published in the Dempa newspaper on February 26th in Japan.)