A variety of social issues are becoming apparent in industrialized nations, such as the need to reduce energy consumption, the growing average age of the population and the dropping birthrate, the decaying infrastructure, and the need to improve disaster prevention and mitigation. Simultaneously, electronic devices are being recognized for the contributions they can make in resolving these problems: "social devices," as they are often called. Dr. Eisuke Masada, chairman of the Railway Technical Research Institute of Japan, a group developing technology for the infrastructural railroad industry, discussed the potentials of these social devices with Satoshi Sawamura, president of Rohm Co., Ltd. of Japan, which is developing advanced electronic devices addressing social issues. 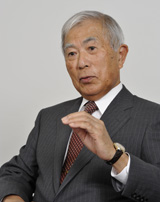 Sawamura: In the past few years, a variety of social issues dealing with human sustainability have gained attention around the globe. Many of them cannot be resolved through conventional approaches, or extensions of existing technology, and I think the role of the corporation must evolve in response. As a manufacturer of semiconductors and other electronic components, Rohm is committed to continuing to contribute to society in many ways, while developing solutions that are smaller and more energy-efficient than ever. The railroad is a very basic part of the infrastructure, and I think the railroad industry must be encountering more social problems than ever before, too.

Masada: The ultimate concerns of the railroad have always been, and still are, safety and reliability. We are most concerned with three key issues right now, the first of which is energy. I think the entire world is very concerned about reducing the environmental impact of energy use, and of course that includes the railroad industry. After the Great East Japan Earthquake, improving the energy supply system in Japan became a priority, and as a result we are all even more aware of energy-related issues.

And the third concern is information and communications technology, or ICT. For example, more and more passengers want to be able to use their mobile equipment while riding a train, and the railway company must provide an ICT environment to make it possible, because that level of service is needed to maintain passenger volume. In the major Japanese metropolises, many people use the trains without seriously considering other options, but in the United States, for example, which is an automobile-centric nation, many people have other options beside the train. If people are using mobile equipment more often in daily life, then failing to provide the needed environment could well result in a drop in passenger levels.

As the number of people using IT tools to collection information increases, I think railroads will also have to change the way they provide information. Instead of merely displaying it at stations, for example, they will have to provide it via a range of media, developing new ICT-based methods of communication with passengers.

Innovating Out of the Energy Crisis

Sawamura: More corporations are recognizing the concept of Creating Shared Value, or CSV, which attempts to create balance in the value to society and the value to the company while resolving social problems through corporate activity. Rohm remains constantly aware of its relationship with society throughout its business, and has defined social contribution as a key objective in both its corporate philosophy and its basic management policy. As a result, instead of working to reduce the energy used in the consumption of goods, we emphasize the development of products that can contribute to manufacturing that consumes less energy and resources. For example, by improving the efficiency of the analog ICs essential in AC-DC and DC-DC converters, and in power semiconductors, we make a real contribution to reducing power consumption in electronic equipment.
Our compact RASMID series diodes (Fig. 1) and resistors, made possible through newly developed fabrication technology, already utilized in smartphones and other mobile devices, are contributing to reduced consumption of materials. Because the components are smaller, the circuit boards they are mounted on and the other components can also be made smaller, further reducing material consumption.

In addition to improving output, we also work to reduce the environmental impact of manufacturing, enhance traceability, and avoid using "conflict minerals." This social stance was significantly strengthened by the Great East Japan Earthquake and the power crisis that followed it. Each and every employee is aware of our responsibility to society.
You mentioned a number of issues facing the railroad industry a moment ago... is R&D into these problems already under way?

Masada: Of course. For example, superconducting cables to supply electricity. Electric cables are presently made of copper, but the electric resistance of copper means that a portion of the energy flowing through them is lost. Resistance increases with cable length, increasing losses. With superconducting cable, however, electrical resistance is cut to almost zero, which means almost no energy is lost. If it can be put into practical use, it will not only provide a major rationalization of the railroad electric power system, but will also be a major step in slashing energy consumption.

Research into improving efficiency in maintenance and safety work is working to utilize electronics and ICT, such as using sensors to monitor and manage the states of cars and tracks. Railroad maintenance often depends on the human senses, including visual inspection of internal or external appearance, or listening to the sound of a hammer blow. The sense of smell is also important in quickly detecting abnormalities. If sensors can be used to replace these functions that now depend on human senses, and automate them, it will provide a major improvement in maintenance efficiency. Because technology can visualize the expertise that now depends on human senses, it is a good way to ensure that the expertise of skilled engineers is retained. I think that Rohm technology can play a major part in making this type of system a reality.

Sawamura: Yes, we already offer a wide range of products addressing social issues, such as infrastructure management. More and more of our customers are deeply involved in social systems, and we provide them with sensors to digitize information from the natural world, or wireless communication technologies and products to collect information acquired by sensors. Demand is increasing a many sectors: mobile equipment such as smartphones, security systems, medical electronics, and even architecture and civil engineering. I think we could make a major contribution to the maintenance management systems you describe.

In wireless communication technology, we are now working on an ultra-low-power wireless communication technology called EnOcean. In conjunction with energy harvesting, which converts a variety of energy in the environment including light and motion into electricity, EnOcean makes it possible to create wireless switches that do not require external power sources or wiring. If this type of switch gains widespread use, it would become possible to control power on/off with very high precision.

Masada: The power devices that Rohm is so strong in represent a crucial energy field, don't they?

Sawamura: Yes, and that's why we're so committed to them. Power devices are the core components in circuits that convert electrical power, and they are used in almost all equipment that uses electricity. Most equipment cannot use the electric power distributed directly from the power station, but instead has to have it converted in the home or factory. Equipment also has its own internal conversion circuits to make the currents and voltages it needs to operate. In other words, conversion circuits are found throughout electronic systems. Unfortunately, every time you convert electricity, there are losses, but if those losses can be reduced it means consuming less energy.

We are developing power devices made with silicon carbide (SiC), considered by many to be the next generation of semiconductor material. Compared to conventional semiconductors, SiC power devices offer low losses and high reliability. If conventional power devices are replaced with these new designs, it provides a major improvement in energy utilization efficiency, and makes possible dramatically smaller cooling systems. This translates into not only less wasted energy, but also smaller heat radiation and cooling mechanisms, which mean smaller equipment.

The first SiC power devices entered practical use a few years ago, and they are approaching widespread adoption now. They are also extensively used in next-generation vehicles such as electric and hybrid automobiles, industrial equipment, and solar power generation systems, and are breaking into a host of new applications. Rohm has established itself as a global leader in SiC power devices (Fig. 2), and continued development in the field will increase our contribution to society.
We also provide a variety of other innovative power devices addressing the needs of emerging applications, such as the HybridMOS combining the best features of MOSFETs and bipolar transistors. Through these and other exciting new products we are continuing to expand our share of the power device market. Masada: Technologies and devices to convert electricity will become even more important in the future, I think. Railroads, the electric power grid, and other infrastructures have evolved independently of each other, but as society pursues efficiency and rationalization, I think we will see multi-purpose infrastructures, and perhaps they will incorporate renewable energy sources such as solar or wind power generation. These large-scale systems will no doubt require power conversion in many places, and that will surely increase the importance of power devices capable of converting electricity.
Just in the railroad market alone I think there will be major growth in power device demand, because of the accelerating need to construct and upgrade rail networks in industrializing nations. On a global level, some 20 trillion yen is invested into rail systems annually, according to some estimates. The railroads being built now will be predominantly electric, because of global environmental issues, and that should create a significant market for power devices.

A Host of New Technologies to Transform Society

Sawamura: We are developing an extensive selection of new technologies and products to help resolve the problems faced by society, in addition to power devices. One new business is the solid hydrogen fuel cell we are developing jointly with Aquafairy Corporation of Japan, which provides a backup power source in emergencies. It is clean energy, emitting no harmful waste or noise during power generation, and is lightweight compared to existing batteries. In addition, it lasts up to 20 years. We have already trialed a compact type for mobile equipment, a high-output hybrid design with internal Li-ion rechargeable batteries, and a long-duration type to power instrumentation that can operate for six months or more.

Rohm has developed a variety of sensing technology, and today it is helping resolve problems in medicine and health care, which are becoming increasingly important as the average age rises in Japan. We are developing new technologies like our µTAS biochip that can check a person's health from his or her saliva; a broad-waveband CIGS image sensor that can capture imagery from inside the human body without affecting it; a wearable pulse sensor to monitor health anywhere and anytime; an ultraviolet sensor to detect harmful UV radiation; and more.

Masada: Exactly how these technologies are utilized to resolve specific requirements will define how well they are utilized by society.

Sawamura: I agree. We are developing a large number of technologies offering considerable potential for the future, but we certainly don't understand all of the possible applications. I'm pretty sure that we only know about a very small fraction of what society needs, and that's why I am increasing our interchange with people in other fields and other industries, especially those we haven't had much interaction with in the past. If our technology is applied in more fields, it will increase our contribution to society. 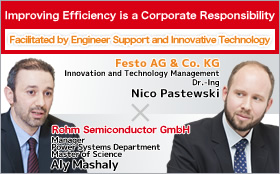 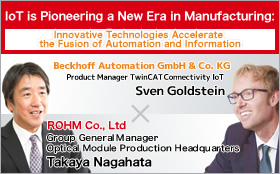 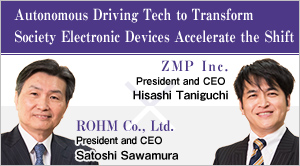 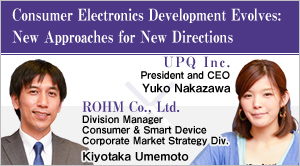 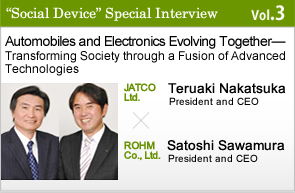 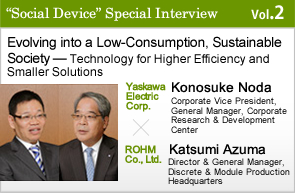 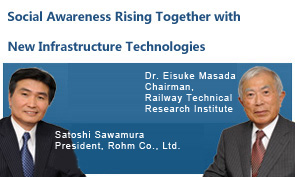 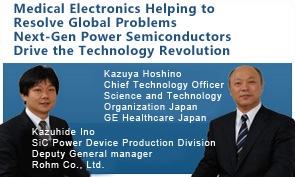