Beijing, China – April 22, 2011 – Japanese semiconductor manufacturer ROHM Co., Ltd. and Tsinghua University (Beijing, China) has announced the completion of the Tsinghua-Rohm Electronic Engineering Hall, which was constructed with donations from ROHM. ROHM and the University held a series of events on April 22, 2011, to celebrate the completion of the new facility, including a commemorative concert by renowned Chinese pianist Li Yundi. The partners also hold the TRIFIA 2011 Tsinghua-Rohm International Forum of Industries and Academia on April 23. The latter forum, which sparks a lively discussion on academic-industrial alliances between China and Japan, featured commemorative lectures by Li Tingye, professor emeritus at Tsinghua University (and previous AT&T Bell Laboratories researcher) who pioneered the high-capacity optical communication technology that underpins much of the Internet, and Shuji Nakamura, a professor at the University of California who fostered innovations in displays, lighting, and optical disc capacity using nitride semiconductors, as well as presentations introducing state-of-the-art technology in China and Japan along with the partnerships between industry and academia that are driving its evolution.

The events, which were held as part of Tsinghua University's celebration of the 100th anniversary of its founding, commemorated the completion of Tsinghua-Rohm Electronic Engineering Hall two and a half years after the partners agreed to its construction in September 2008. In addition to housing research facilities and classrooms in its role as the main building of the Tsinghua University Department of Electrical Engineering, the new structure, which provides a total of 33,000 square meters of floor space on 3 belowground and 11 aboveground floors, provides a joint research space for use by ROHM and the University, an international exchange center, and an auditorium for holding academic presentations at meetings of academic societies and other events. Beyond the academic research it facilitates at the University, the new building will serve as an international center for the dissemination of information about state-of-the-art technology, acting as a space where off-campus companies, universities, research institutes, and other organizations can pursue broad partnerships.

ROHM and Tsinghua University have taken advantage of the Comprehensive Agreement on Cooperation Between Industry and Academia they signed in April 2006 to actively pursue a partnership involving exchanges of researchers and events such as the Tsinghua-Rohm Technology Forum in a range of fields including communications and broadcasting, bio-chips and point-of-care testing (POCT), power devices and systems, and optical devices and applications. It was against the backdrop of these activities that the parties agreed to build the Tsinghua-Rohm Electronic Engineering Hall in September 2008, pledging to pursue an active research and development program from a long-term perspective. Construction of the facility proceeded with the goal of an April 2011 completion.

ROHM has actively pursued research and development through partnerships with academia, industry, and government by strengthening alliances with numerous research institutions in Japan and overseas as part of a longstanding effort give something back to society while improving the technical sophistication of semiconductors and other electronics for which development needs are accelerating. The company has also sought to improve electronics technologies with a focus on semiconductors and to promote technology by donating ROHM Plazas at Ritsumeikan University, Doshisha University, and Kyoto University in Japan. ROHM expects the newly completed Tsinghua-Rohm Electronic Engineering Hall to make a significant contribution to progress in international electronics technology. 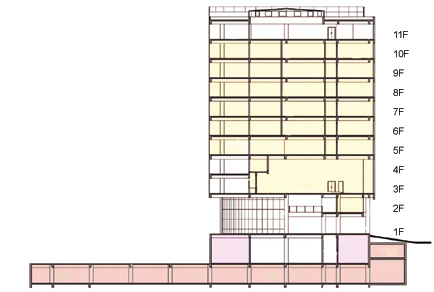 Allow me to offer my heartfelt congratulations on this, the 100th anniversary of the founding of Tsinghua University. I would also like to express my gratitude to President Binglin Gu and everyone else involved with Tsinghua University for their understanding of ROHM's resolute desire to pursue international partnerships among industry, government, and academia by strengthening its partnership with the University. I would also like to thank this group of committed individuals for their instrumental assistance in bringing the construction of Tsinghua-Rohm Electronic Engineering Hall to a successful completion as part of the celebration of the 100th anniversary of the University's founding and in holding this wonderful opening ceremony.

Looking back, it was the signing of the Comprehensive Agreement on Cooperation Between Industry and Academia by Tsinghua University and ROHM on April 27, 2006, that signaled the beginning of their partnership in advanced electronic device technologies. Our two organizations subsequently embarked on a project to build Tsinghua-Rohm Electronic Engineering Hall, where we gather today to celebrate its opening five years later.

ROHM has recently turned a new page in our history with the celebration in September 2008 of the 50th anniversary of our founding and the formulation of a Mid-term Plan "NEXT 50" that lays out a vision for our company as a leader in the global semiconductor industry over the next 50 years. Even as the electronics industry experiences a series of extreme changes, our timeless Company Mission—the very DNA of ROHM that has been passed down over the years—will continue to guide us over the next half-century. That mission talks about "contributing to the advancement and progress of our culture." At ROHM, we believe that it is precisely by developing new technologies that play a useful role in society and striving to train workers to carry out that important work that we contribute to the advancement and progress of our culture and society, and we have actively pursued partnerships with a broad array of research institutions, universities, and companies in different fields. Tsinghua-Rohm Electronic Engineering Hall epitomizes this approach on an international scale. I fully expect that new technologies born from the strong bonds between Tsinghua University and ROHM and from Tsinghua-Rohm Electronic Engineering Hall will flower and produce fruit, thereby contributing to the advancement and improvement of Chinese and Japanese culture, and by extension of the world's culture.

China's recent hosting of the World Expo 2010 Shanghai was a fantastic success, and the country's GDP has now surpassed that of Japan, making it the world's No. 2 economy. Countries worldwide now depend greatly on China's economic growth. It is no exaggeration to say that China plays an essential role in the global economy. For us at ROHM, China comprises an extremely important region in which we are working to strengthen our operations in every area, including development, manufacturing, and sales. We're also looking forward to strengthening our relationship in the area of business.