Despite the overall downturn in the PC industry, all indications suggest the gaming segment of the market is growing. Motherboard makers have been increasingly eager to cash in on that trend, and MSI may be most aggressive among them. The company rolled out a deep lineup of so-called gaming boards last year, democratizing a style that had been largely limited to high-end offerings with premium prices.

If you're unfamiliar with this particular sub-genre, here's the lowdown. Gaming-specific boards typically involve subtle tweaks to the tried-and-true enthusiast formula. They usually have different audio and networking components, plus bundled software and other extras, but they're otherwise similar to ostensibly non-gaming models. Now, back to our regularly scheduled programming.

MSI's gaming motherboard family has grown to span multiple price points, CPU sockets, and form factors. It just welcomed a bunch of new members based on Intel's 9 Series chipset, including eight that use the enthusiast-oriented Z97 variant. One of the most interesting is the Z97 Gaming 7. This $184.99 offering is a little more upscale without going overboard; it's equipped with three PCIe x16 slots hanging off the CPU, Sound Blaster-infused audio, slick fan speed controls, and a collection of little touches that are sure to please seasoned PC builders. And don't forget all the trappings associated with the Z97 chipset, like support for future Broadwell CPUs and PCIe SSDs. 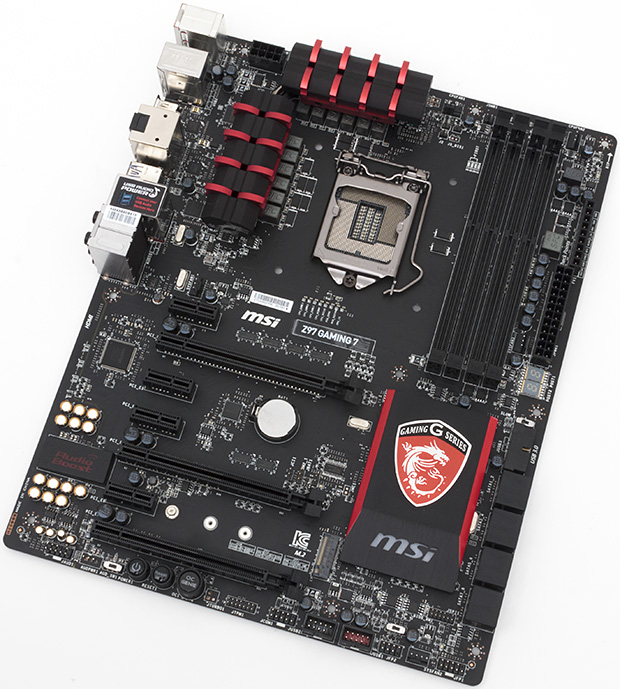 This is really a blacked-out board with subtle hints of red here and there. The matte PCB surface is especially nice, and the landscape is largely free of excessive lettering and other silk-screened graphics. The splashes of color on the heatsinks are the only real deviations from the darkness. Unfortunately, the color matching is a little off. The VRM heatsinks have a bloodier tone, while PCH cooler exudes more of a Ferrari vibe.

And there's a dragon. Because gaming, or something.

Once the Z97 Gaming 7 is stuffed inside a case, all you're likely to see is the glow of its LEDs. There aren't too many of those, which keeps the aesthetic pretty subdued overall. 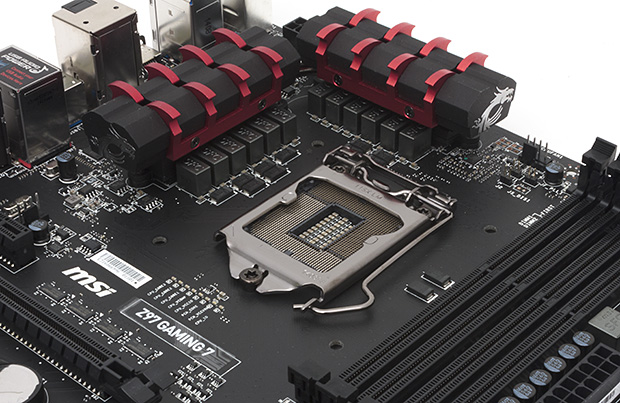 MSI carries the dragon theme over to the VRM heatsinks, which are designed to resemble claws. As much as I appreciate the continuity, the socket area isn't the best place for pointy bits of metal. The heatsinks already crowd the area around one of the retention holes, and their little claws represent another obstacle that must be negotiated when installing the CPU cooler.

The VRM heatsinks may threaten to take a chunk out of your knuckles, but they're only about an inch tall, so they shouldn't interfere with larger aftermarket coolers. There's plenty of room between the CPU socket and the top PCIe x16 slot, too. As is usually the case with Intel boards, the most likely source of cooler conflict is the array of DIMM slots next to the socket. Standard-height modules shouldn't be an issue, but taller DIMMs can bump into some heatsinks. Since we can't confirm compatibility with every hardware combo, we've included some detailed socket-area measurements later in the review. 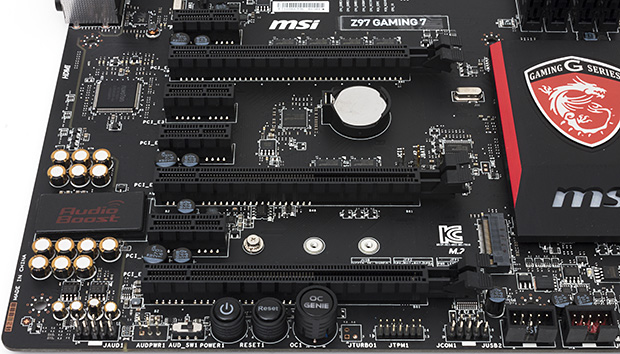 Gamers are the most likely to multi-card graphics configs, so it's only fitting that the Z97 Gaming 7 has robust support for such configurations. The board splits the 16 PCI Express 3.0 lanes hanging off the CPU between a trio of x16 slots. Those lanes can be routed only to the first slot, split evenly between the first and second slots, or spread across all three in an x8/x4/x4 setup. The three-way mode works with AMD's CrossFire tech, but SLI support is limited to dual-card configs.

MSI does a particularly good job with the slot spacing. Dual-double-wide setups have room to breathe, there's enough space for two triple-wide cards, and three double-wide cards can be stacked in cases with eight expansion slots.

In addition to the x16 slots linked to the CPU, there are four PCIe x1 slots attached to the Gen2 controller in the Z97. PCI expansion didn't make the cut, which shouldn't be a surprise. Intel dropped PCI support from its chipsets years ago. Motherboard makers must use third-party chips if they want to provide PCI slots, and I suspect few gamers are clinging to expansion cards compatible with the old-school standard.

An M.2 expansion slot is nestled near the bottom of the stack. The mini SSD slot accepts both PCIe and SATA drives up to 80 mm long. PCIe drives hook into dedicated storage lanes in the chipset, while SATA drives connect via the Z97's SATA controller. 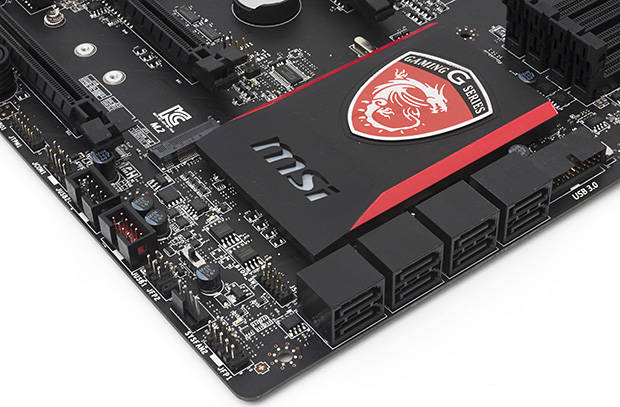 Despite the chipset's support for SATA Express, the Z97 Gaming 7 forgoes the nascent standard. MSI argues that SATAe devices are too rare, and it has a point. We probably won't see more than a trickle of SATAe drives until next year. The company intends to offer an M.2-to-SATAe converter for folks who want to run SATA Express drives. It looks like that adapter will place the SATAe port perpendicular to the board, though. The associated cabling may interfere with double-wide cards installed in the second x16 slot.

On the Serial ATA side, the Z97 Gaming 7 sports six 6Gbps ports tied to the chipset. Two more ports (on the left) are linked to an ASMedia chip, and I would only recommend using them if all the others are occupied. The auxiliary storage controller is slower than its chipset-based counterpart.

Additional peripheral controllers are a staple of higher-end boards, and the Z97 Gaming 7 doesn't just use them to supply extra SATA ports. It also employs separate hub and controller chips to provide extra USB 3.0 ports. The Gaming 7 offers eight SuperSpeed ports at the rear and two more via a front-panel connector—10 ports in total, and four more than the six integrated into the chipset. 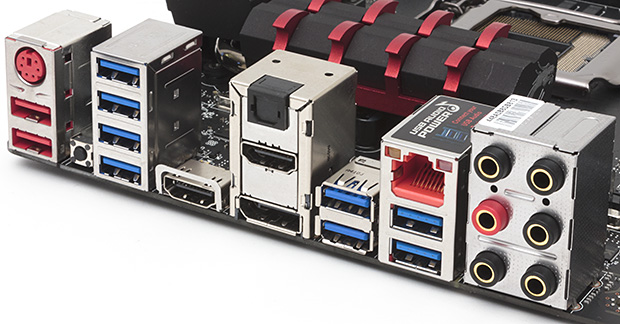 The extra USB ports are nice to have, but MSI should really identify which ones are connected to which chips. Users shouldn't have to dig into the Windows Device Manager to figure out how the ports are routed. MSI does, however, mark the two USB ports with improved power delivery for external audio DACs. (They're tucked under the Gigabit Ethernet jack.) The company also singles out the red USB ports on the left side of the cluster. These ports are limited to USB 2.0 speeds, but they support polling rates up to 1000Hz for picky twitch gamers.

All the red-colored ports have a gaming focus. The PS/2 port supports true n-key rollover, while the Gigabit Ethernet jack is backed by a Qualcomm Killer chip that comes with traffic prioritization software. The management software can improve ping times in situations where multiplayer games are competing for bandwidth with other applications running on the same machine, but it won't alleviate congestion at the router level or higher up the chain.

The red analog audio jack is the Z97 Gaming 7's amplified stereo out. It's powered by one of two Texas Instruments OPA1652 chips; the second amp is tied to the front-panel headphone out. These amplifiers support headphone impedances up to 600 O, and they're not the only upgraded audio components. The Realtek codec is covered by an EMI shield, the traces are isolated from other board circuitry, the capacitors are fancy Nichicon units, and the power supply can be switched to an external feed driven by a four-pin Molex connector. 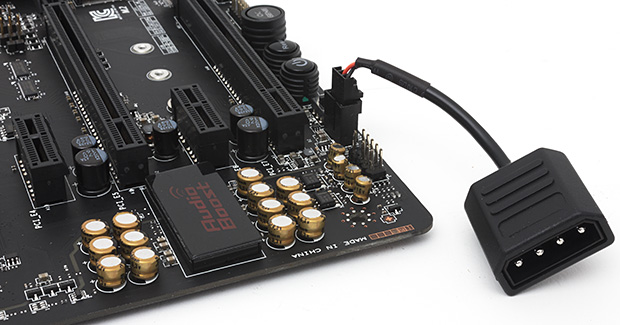 All those tweaks combine to produce pretty decent sound quality. The output doesn't sound as rich or detailed as that of our favorite budget sound card, but it's good for an integrated solution. There's no obvious hissing or distortion in the line even when the system is slammed with a combined CPU, GPU, and storage load.

The final piece of the audio puzzle is Creative's Sound Blaster Cinema 2 software. This application provides surround-sound virtualization in addition to a bunch of configurable effects that most folks will probably never use. I'd trade all of those effects for the ability to encode multi-channel audio for digital output. Right now, the only want to get multi-channel game audio out of the S/PDIF port is to fake it with speaker virtualization.

Integrated audio is a big-ticket item, but we've been reviewing motherboards long enough to know that it's often the little things that make the biggest impression. With that in mind, we'd be remiss not to discuss some of the smaller details that make the Z97 Gaming 7 particularly appealing.

Let's start with the cushioned I/O shield, which lacks the sharp edges and slivers of metal that typically adorn this component. The soft-backed shield makes motherboard installation much easier, and it's colored black both inside and out.

While the port cluster is in view, note the CMOS reset button on the left side. There are other onboard buttons, as well, including the requisite power and reset switches. Holding the power button for a few seconds boots the board directly into the firmware, which is very convenient. This boot-to-BIOS shortcut works with case switches connected to the front-panel header, too.

The Z97 Gaming 7 comes with wiring blocks for its front-panel connector and one of its USB 2.0 headers. The front-panel block makes case wiring much easier, and every enthusiast board should have one. MSI also gets kudos for including stick-on labels for SATA cables. Some of the other extras, like the probe harness for the onboard voltage monitoring points and the slow-mode switch that caps the CPU multiplier at 8X, are meant for extreme overclockers. These extras have more limited appeal, especially on a gaming-specific product. MSI has a separate family of overclocking boards that cater to the liquid nitrogen crowd.

Now, let's see what the Z97 Gaming 7 holds on the firmware front.

Click here to see the article as originally published: http://techreport.com/review/26458/msi-z97-gaming-7-motherboard-reviewed