Digital power technology adoption is surging with recent announcements from Asia, Europe and the U.S. Digital power is no longer an emerging technology, but has entered the mainstream. As the pace of introduction for digital power products continues to accelerate through the next twelve month, "digital power" itself is expected to become less and less a selling feature and will be increasingly taken for granted (it will "disappear" from news announcements) as the best technology to achieve superior performance in both power converters and in overall power systems. The recent announcement of PMBus V1.3 is a good indication of the mainstream status of digital power.

PMBus V1.3 will include numerous enhancements and improvements including a 2.5-times faster throughput (more details are listed below). Other recent product announcements (from the "Top 50 New Products for 2013" currently being published in www.PowerPulse.net) include: The LTM4676, a dual 13A or single 26A µModule® step-down dc-dc regulator from Linear Technology Corp. with a serial digital interface. The BMR456-SI 468W digitally-controlled dc-dc bus converter from Ericsson Power Modules. And the BPE-37 from Bellnix Co., Ltd. that includes 4 point-of-load converters (POLs) on a board together with a PMBus interface and digital control.

The European power electronics community, in particular, has taken a leadership position in driving both the development of and adoption of digital power. Two examples of that leadership can be seen in Ericsson Power Modules and Powervation. Introduced just last month, the BMR463-25A from Ericsson is a third-generation digital POL regulator that offers a power density of 28.44W/cm3 (465W/in3), delivering 25 percent more output current in the same footprint as second-generation 20A module and the new POL includes Dynamic Loop Compensation which improves stability and shortens time-to-market.

With a footprint that is fully compatible with the second-generation BMR463-20A the new POL features a full set of PMBus commands enabling systems architects to fully monitor and dynamically control the energy delivered to strategic components, such as processors, FPGAs, ASICs and others, down to a very low and highly economical level. Embedding the latest technology in terms of Dynamic Loop Compensation, the BMR463-25A runs the DLC algorithm as default each time the output is enabled. However, three more settings are also available via the PMBus for systems architects to choose the most appropriate method for their application with the DLC algorithm run every second or every minute or simply disabled.

In addition to standard methods, designers can also use the Loop Compensation Tool featured in the latest Ericsson Power Designer software to set their own loop compensation profile to match specific application requirements. In addition, developed with high efficiency in mind, the BMR463-25A powertrain is composed of the latest MOSFET technology to deliver up to 95.2 percent efficiency at 3.3V output and up to 89.4% at 1.0V when the output load is at 50 percent.

Also last month, Powervation Ltd. made the latest in a series of announcements about the adoption of its digital power control technology when Bellnix Co., Ltd revealed that it has adopted the PV3012 digital controller for use in a new low-profile, 60A dc-dc (D2D) module. The BDP12-0.6S60R0 digital power module is a PMBus-compliant, non-isolated step-down converter that is designed for today's communications and computing applications, and addresses the needs for small form-factor designs while providing high levels of reliability and performance. 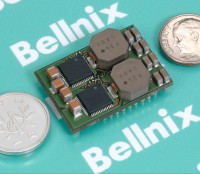 As is evident from the two preceding developments, digital power management and control are no longer considered "emerging" technologies. They have entered the mainstream and are now widely considered to be commercial products and are now used in a variety of applications ranging from IT and communications infrastructure to portable electronics and lighting. In addition to the traditional areas, digital power also impacts a broad range of non-traditional applications such as hybrid electric vehicles, and alternative energy sources including solar and wind. The growing range of applications means that the factors driving adoption of digital power control are changing.

The value of digital power has always been the functions it can provide, and that functionality has become more defined and focused over the past several years as users demand a number of specific features and operations such as auto-compensation, PMBus capabilities, loop control, etc. The continued growth of digital power use is also evident in the continuing investment the industry is making in the PMBus standard. Shortly, a major revision to PMBus will be finalized.

PMBus V1.3, which is in the final stages of the approval process, will include: higher speed communication to reduce latencies; a dedicated Adaptive Voltage Scaling (AVS) bus to statically and dynamically control processor voltages; and general enhancements and cleanup from Version 1.2. This presentation added details to that initial announcement, including a 1-MHz Clock, Mandatory Clock Stretching Support and Backwards Compatibility using the same open-drain signaling as the previous PMBus specification. These changes are expected to result in a 2.5-times faster throughput.

Opinion: How to Leverage the PAR4 Metric (UL2640) for an Energy Efficient Data Center

As previously announced, the addition of AVSBus for Adaptive Voltage Scaling is a major change in PMBus 1.3. The AVSBus is behaviorally and electrically similar to SPI bus without chip select lines. In this case, the AVS_MData and AVS_SData are equivalent to MOSI and MISO and the AVS_Clock is equivalent to CLK of the SPI bus. The new specification supports a 50MHz maximum bus speed.

The use of digital power techniques such as PMBus gives system developers greater flexibility in design. For instance, an increasingly complex power distribution system may require a large number of voltage rails, which are needed to sequence or track other rails to properly bias microprocessors, ASICs, FPGAs, microcontrollers, and any other digital logic ICs present in the system and likely to require different voltages for operation. As a product design moves through various phases, changes in the design may occur including the addition of another power rail, more current on a rail, or the requirement for a tighter transient response. This would require the redesign of the power distribution, whereas a digital power solution is flexible and can adapt with changing requirements.

A new voltage rail can be added to the power-management system using the industry-standard SMBus. The digital power ICs communicate with each other via the SMBus using the Power Management Bus (PMBus) protocol, the standard protocol for communicating with power conversion systems using a digital communications bus. The use of PMBus and PMBus-enabled devices for power conversion provides flexibility and control that is not possible with traditional analog power systems. Adding a new rail is integrated into the monitoring, sequencing, margining and fault detection schemes.

The digital power IC for the new rail is provided with its own SMBus address and is added to the system and there is no need to reprogram or add more stand-alone power-management ICs because of the additional voltage rail. In addition, for system monitoring, a digital power solution provides multiple methods of reacting to a fault. Over-current and under-current, over-voltage and under-voltage, and over-temperature faults and warning thresholds can also be configured and adjusted throughout the entire lifecycle of the product. As stated earlier, a digital power solution can reduce cost–the lower component count makes a more reliable and longer-lived system.

A big advantage is that digital power enables designers to use the same device for each voltage rail and make changes to the operation of the device without having to make costly hardware changes. Digital power solutions can be more efficient by meeting increasing thermal demands, an increasingly common challenge as boards become denser and generate more heat.

Opinion: How to Leverage the PAR4 Metric (UL2640) for an Energy Efficient Data Center

Today, digital solutions are being driven by the need for specific functions in emerging applications that are driving new power architectures. As a result, this is leading to new system configurations that require new power supply designs. Standards for energy efficiency and power management continue to evolve, as well, and some of the new ones are combining to create new opportunities in existing applications. One of the major features of digital power is that for any given system application, the end user will typically select only a subset of the available digital power solutions. This decision will be based on factors such as cost, complexity and system availability and maintenance requirements. Darnell's soon-to-be-released analysis of the market for dc-dc converter modules will include a highly detailed and quantitative analysis of the continued evolution and development of digital power as one of the major themes.