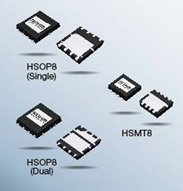 ROHM has recently announced the development of power MOSFETs for low-voltage DC/DC converters used in servers, notebook PCs, and tablet PCs. This new series features high efficiency and is available in 16 different models and 3 space-saving package types for broad compatibility.

The increasing performance of servers and notebook PCs has led to a rise in power consumption and a drop in operating voltages across the CPU and other circuitry, increasing temperature while shortening life. In order to alleviate this, power MOSFETs are being mounted in a wide variety of power supply circuits, such as synchronous rectification DC/DC converters that play a key role in power conversion efficiency. However, for a power MOSFET to achieve low loss and high efficiency it is necessary to reduce both ON resistance and gate capacitance – impossible to achieve before now.

ROHM's latest power MOSFETs feature simultaneously low gate capacitance and low ON resistance through a proprietary low-capacitance structure along with a new 'trench-type field plate structure' and advanced miniaturization technology. As a result, FOM (Figure of Merit, a performance indicator of power MOSFETs for DC/DC converters) is reduced 50% compared with conventional products, achieving industry-leading switching performance. This minimizes both switching loss at the high side of a synchronous rectification DC/DC power supply circuit and conduction loss on the low side, increasing the efficiency of the entire system. It also allows for synchronous rectification at high frequency, making it possible to use smaller peripheral components. In addition, ROHM conducts 100% testing of Rg (gate resistance) and UIS (low-load avalanche capacity) to ensure optimum performance and reliability in synchronous rectification circuits.