ROHM recently announced that they have begun mass-production of 1200V/180A-rated SiC MOS modules for inverters/converters used for industrial equipment, photovoltaic power conditioners and the like. This new product is the first* module to incorporate a power semiconductor comprised of just an SiC MOSFET, increasing the rated current to 180A for broader applicability while contributing to lower power consumption and greater compactness.

In March of 2012 ROHM was the first supplier in the industry to mass produce 1200V/100A ‘Full SiC' modules that utilize SiC for all power semiconductor elements. The goal was to balance the need for larger current handling capability with a smaller form factor for industrial equipment and other applications. Normally, increasing current rating entails integrating more MOSFET elements and similar measures. However, this requires diode rectification, which makes it extremely difficult to reduce or even maintain device size. 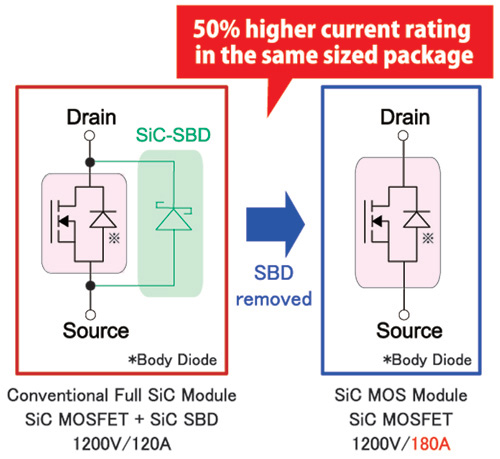 In response, ROHM has successfully developed an SiC power module utilizing 2nd generation SiC MOSFET technology that minimizes conduction degradation of the body diode, eliminating the need for a diode rectification. This makes it possible to increase the mounting area for higher current handling capability while maintaining the same compact form factor.

In addition, by improving processes and device structures related to crystal defects ROHM was able to overcome all problems related to reliability, including the body diode. The result is 50% less loss compared with conventional Si IGBTs used in general-purpose inverters. This decreased loss, along with an operating frequency greater than 50kHz, ensures compatibility with smaller peripheral components for greater end-product miniaturization. Switching characteristics are maintained even without an SBD. And unlike Si IGBTs, no tail current is generated, reducing loss by more than 50% for greater energy savings. In addition, switching frequencies over 50kHz are supported (impossible with Si IGBTs), contributing to smaller, lighter peripheral devices.

General-purpose Si IGBT devices are not capable of conduction in the reverse direction. In contrast, the body diode in ROHM's SiC MOSFET always conducts in reverse. Also, depending on the Gate signal input the MOSFET can operate in either direction for lower ON resistance vs. using just the diode. These reverse direction conduction characteristics allow high efficiency synchronous rectification in the 1000+V range – higher than diode rectification. 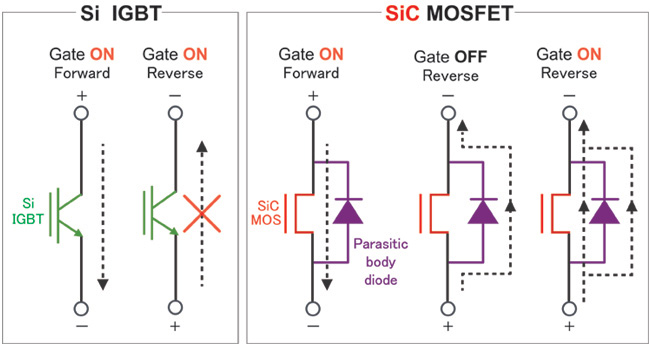 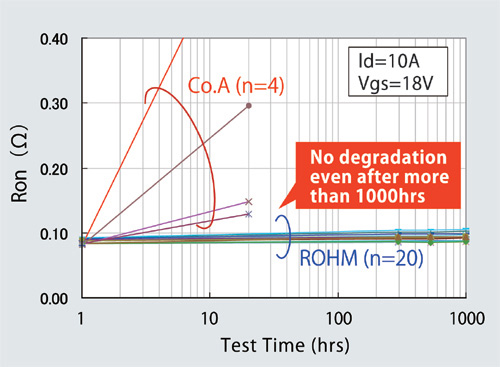 Clarifying the mechanism by which defects are spread based on body diode conduction makes it possible to minimize the primary factors through process and device construction. With general-purpose products the ON resistance increases significantly after 20 hours. In contrast, ROHM's new module ensures no ON resistance increases – even after more than 1000 hours.